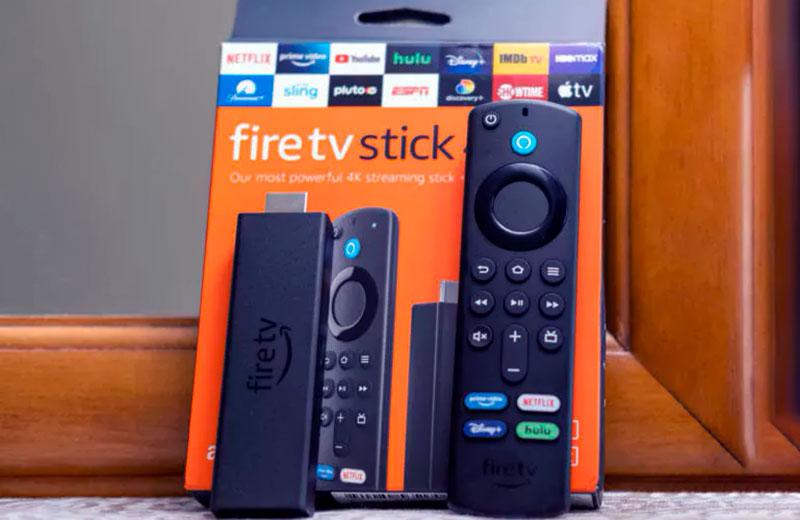 The main characteristic of a TV box for a user is not the amount of RAM or internal memory, not Wi-Fi or even 4K. Price is key, and it makes the Amazon Fire TV Stick 4K Max one of the best models on the market.
The word Max in the title is quite justified – the media player is 40% more powerful than its predecessor. Therefore, applications should launch faster and navigation should be smoother. True, these are trifles that are difficult to notice in real use.
There are not many important updates to the previous TV stick, but these innovations are quite significant. Amazon has once again managed to release a TV stick for TV that outperforms most of the competition. Yes, there is no support for the Russian language by default yet, but among such media players it is worth choosing the Fire TV Stick 4K Max.

Basically, the Amazon Fire TV Stick 4K Max TV Stick is the same 4K Stick with a couple of minor changes.
The last model is already three years old, so anyway it’s time for a new one to come out. However, not all of the updates here turned out to be important. It should be said that this is the first stick TV box from Amazon with support for Wi-Fi 6 networks. If you have a router with this standard, you can take full advantage of the new wireless data transmission standard.

The speed should be more than enough to stream any movie or series. Of course, you can use an Ethernet adapter, but in terms of convenience, Wi-Fi cannot be compared. The included adapter from Amazon is limited to 100 Mbps. This is often not enough, especially for streaming 4K content.
If you have high-speed Wi-Fi at home, upgrading to the newer model is highly recommended. The new TV Stick for the TV also includes a remote control that supports Amazon’s Alexa voice assistant. However, the assistant does not yet understand Russian, so the team will have to speak English.
The remote appeared in April 2021 and has undergone several notable changes since then with a couple of new buttons and functions. And it is encouraging that Amazon continues to develop and improve its products.

Amazon Fire TV Stick 4K Max has become noticeably larger, now the dimensions are – 10.8 × 3.0 × 1.4 cm, and the weight is 48 grams.
The design of the TV Stick 4K Max has remained the same minimalistic – on the black body you will only see the company logo and the name of the TV stick. But, this is not a problem, because almost all the time the device will be behind your TV or other content-playing device.

The new Fire TV Stick 4K Max has more RAM, which is very important.
The gadget runs on Android OS for TV, an operating system that does not consume resources very economically. Of course, 2GB of RAM is not much, but that’s 500MB more than the previous version of the Fire TV Stick 4K, and is enough for a comfortable use.
The processor has also been updated: now we get a MediaTek MT8696 quad-core chipset with a frequency of 1.8 GHz. However, it is difficult to see any difference in performance – the new hardware did not change the already excellent work of the best TV stick from Amazon in any way.
If you’ve used an Amazon TV box before, the Fire TV Stick 4K Max will feel very familiar. In early 2021, a new version of the Fire TV OS system was released, so all the latest stick models have been updated to it.
Fire TV OS is based on Android 9 (although Google recently rolled out Android 12 ), which is a little alarming. Isn’t it time to upgrade to a newer version?

Other features of the Amazon Fire TV Stick 4K Max

Other specs of the Fire Stick 4K Max are pretty much the same as the previous model.
Amazon’s new Android TV Stick features 4K support with Dolby Vision, HDR10 + and HLG to deliver the widest possible dynamic range for content delivery. High-quality sound is provided by support for Dolby Atmos technology.
Of course, all these modern functions must be supported by your TV, along with a sound system, otherwise they are of little use. Interaction with the voice assistant Alexa takes place via the remote control – there is no microphone on the TV stick.
Although the system has been updated, almost all of its elements have remained unchanged, we have access to most of the popular video streaming services. As mentioned above, there is no support for the Russian language. You can find solutions on the network and roll onto a gadget with a different shell and a Russian translation, however, I did not do this – everything is already intuitively clear.

If you are looking for the best TV Stick at an affordable price, and you are not intimidated by the lack of a Russian-language interface, the Amazon Fire TV Stick 4K Max is what you need. It is even preferable to the Fire TV Cube because it costs half the price.
Fire TV Cube was released a few years ago, so the hardware in it is already outdated. Not that this is very important for a set-top box, but a device with new components will last longer. There are not many differences between Amazon’s latest TV boxes, more importantly, they don’t differ much in price.

If you don’t have a Fire TV Stick and are looking to buy the most powerful TV Stick for your TV, the new Fire TV Stick 4K Max is worth picking up on. But, you will have to order it through intermediaries, directly from Amazon, since it is not officially sold in Russia or the CIS.