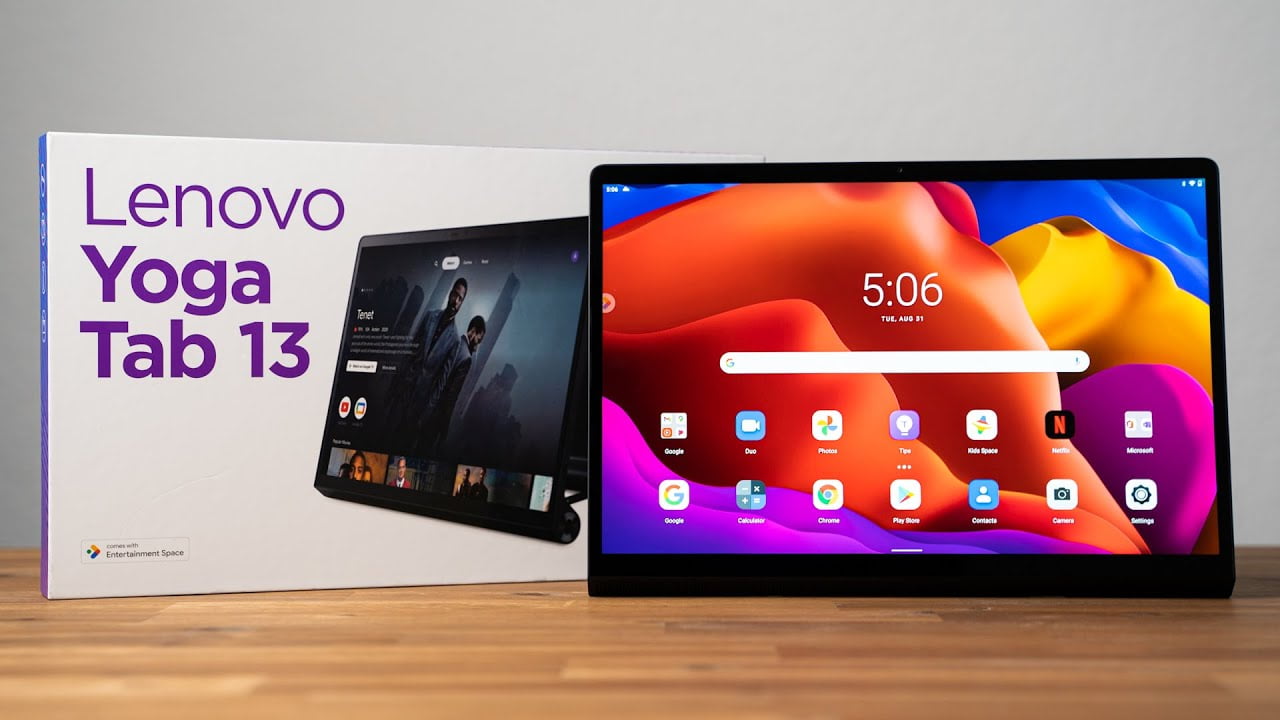 The Lenovo Yoga Tab 13 is more than just a tablet, but rather a big smart home screen for games and movies. Given its impressive size, the Tab 13 could well replace the second TV commonly found in the kitchen.

The Lenovo Yoga Tab 13 is an interesting little thing. First, it is great for watching movies: the screen has 2K resolution, supports HDR10 + and Dolby Vision. And then there are 4 loud JBL speakers.

Secondly, there is a Snapdragon 870 chipset, so it is obvious that the tablet will handle any games.

Thirdly, the convenient hook stand allows you to set the tablet on any surface or hang it.

However, in addition to performing entertainment tasks, the tablet may well function as a second screen for a laptop or PC. Connection is via a mini-HDMI port. Along the way to the tablet, you can buy a stylus and use it for graphic tasks.

Lenovo Yoga Tab 13 is, perhaps, a home solution, since versions with a mobile network are not even implied.

Visually, Lenovo Yoga Tab 13 differs from a typical tablet by the presence of a thickening on the lower horizontal part. There are speakers and a stand. This technical solution made it possible to give the tablet a powerful and rich sound.

Perhaps the most unexpected is the velvet insert on the back of the tablet. Thanks to her, the tablet, of course, has become more tactilely pleasant, but the black velvet perfectly clings to dust.

The screen has neat bezels designed to make the tablet comfortable to hold.

On one side of the “drum” is a Type-C charging port.

On the opposite side there is a mini HDMI, and a standard HDMI adapter is included in the package. A great idea to use your tablet as a second screen.

The back panel is a combination of metal and Alcantara. Probably conceived as an element of luxury, but in fact, Alcantara clings to dust.

Convenient and versatile stand that allows you to place your tablet horizontally on a surface or suspended.

The dimensions are solid, as is the weight (830 g), so the tablet is more pleasant to put on than to hold it by weight. Took the tablet to St. Petersburg and very conveniently placed it on the seat stand.

Perhaps, the lack of a headphone jack can be noted as a minus. But there is an adapter from Type-C to 3.5 mm. Accordingly, the main thing is not to lose it, but better, when choosing headphones, see those that support Bluetooth 5.2 technology in order to avoid audio lag, which will be noticeable in games if you take TWS headphones with the old standard.

Is it any wonder that any games go with a bang. Here you have to take a Game Pass subscription from Google and play! By the way, I recommend paying attention to the subscription. There are at least 5 good games for Android on it (without online and other dreary features, but with a good story!).

In promo images, Lenovo shows the tablet next to an Xbox controller. And, perhaps, it is worth agreeing here that a gamepad is necessary for a comfortable game. For example, Genshin Impact does not support a gamepad, and playing with such a large screen in your hands is not very comfortable, since you have to reach for the controls.

The performance of the Snapdragon 870 will last for several years with a good margin. Along the way, I note that you still need to play on the tablet, because why else would such a margin of performance?

I would like to describe the screen in words that it is just a good quality screen with good color rendering. Perfect for watching movies and playing games.

Perhaps one can only find fault with the fact that the maximum brightness is limited to around 400 nits. I would like, of course, 500 nits, so that the screen does not fail in the bright sun.

There is an 8 MP camera above the screen. The task of the camera is video conferencing. She copes with her perfectly. By the way, the settings have options that allow you to apply filters in real time. You can embellish yourself, or you can blur the background – this is called “privacy protection”. The latter option works great on WhatsApp.

The tablet does not have a rear main camera. Yes, and she is not needed. Perhaps, talking about the screen, we should mention Google Entertainment Space. This is the area to the left of the home screen. I saw it for the first time on a Nokia tablet, and then I didn’t really understand what it was and what it was for.

Google Entertainment Space is Google’s entertainment screen that offers movies, YouTube, games, and books. By clicking on the title, either the Google Play Market or YouTube is launched. I haven’t seen a Google book for 100 years, but then I opened a free one and was pleasantly surprised. Considering the large screen, the book opens to the full spread.

Beautiful animation of page turning. For some reason, I immediately remembered the presentation of the first iPad … It’s cool that there are quite a few free books. But buying films from Google is not the best idea … 129 rubles for the first “Matrix”. It’s easier to buy a subscription to Kinopoisk or Netflix.

Well, since they started talking about films, then one cannot fail to note the gorgeous sound. Firstly, perhaps, this is the loudest smartphone tablet of all that I have had in the last year for sure. Secondly, it is immediately noticeable that the engineers have given space to the speakers. The sound is rich, the stage is felt, even the bass is not bad. The speakers are located both above and below.

The tablet has a giant 10,000 mAh battery. At maximum brightness, you can get almost 10 hours of video. In everyday use, we are talking about 7-8 hours.

The Tab 13 relies on 30W charging. It doesn’t help. A full charge takes about 2 hours. So it’s better to put the tablet on at night.

By the way, please note that in the settings there is an option to save the battery if you plan to keep the tablet constantly on charge. With it, charging will be limited to 60% and will turn on again when the charge drops to 40%.

The Lenovo Yoga Tab 13 is an interesting home entertainment tablet for games and movies. Its advantage is the 13-inch screen size. With such a screen, a tablet can easily replace even a TV. Well, the built-in stand allows you to set up or hang your tablet.

It’s nice that Lenovo did not save money and installed a powerful chipset.

For comparison, the closest competitor, the Samsung Galaxy Tab S7 +, has the Snapdragon 865+ and 6GB of RAM, which is 2GB less. But Samsung has a Super AMOLED screen.