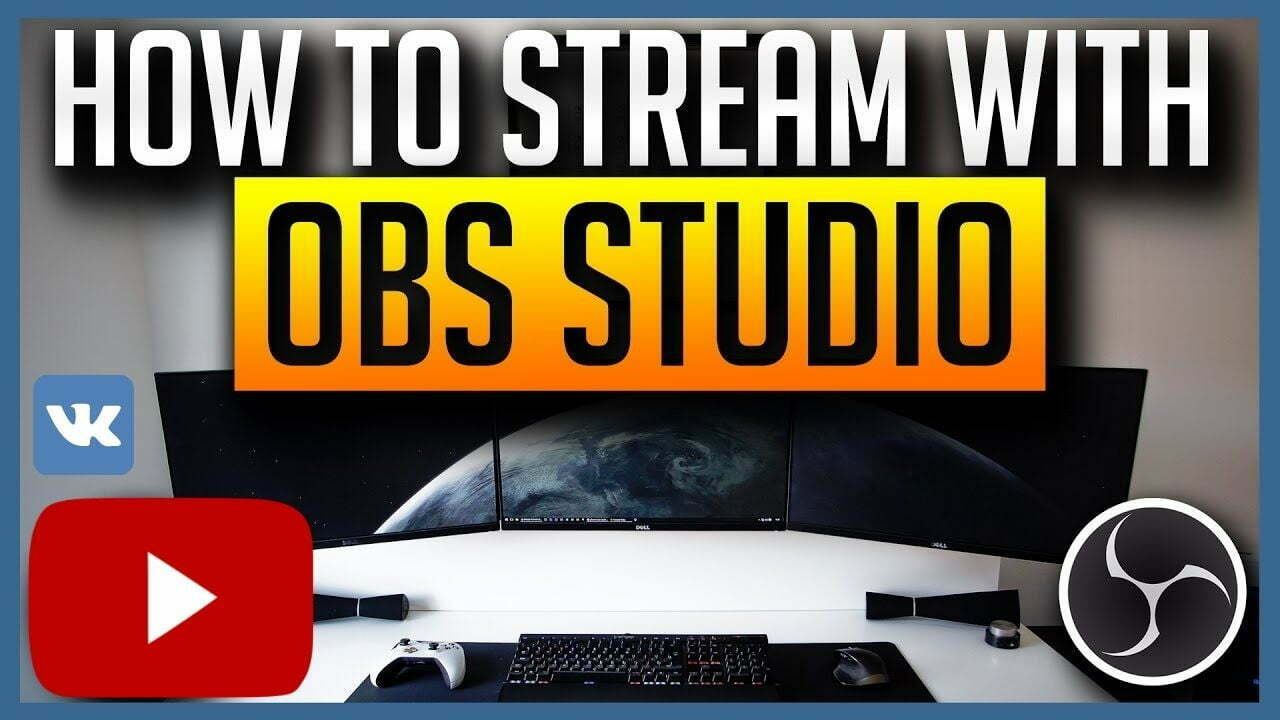 In this article, we will talk in detail about how to make a live broadcast to the Youtube service and VKontakte. We will learn how to put a camera on the air, capture the screen, insert pictures and sound using the OBS Studio program.

Setting up OBS Studio and broadcasting on Youtube and VKontakte

Let’s start by installing and configuring OBS Studio. This is free software that can be downloaded from the official website of the program https://obsproject.com/en , go to the Download section and download the distribution kit. Follow the instructions during installation.

Let’s start right away by adding a source. A source is a separate broadcast layer, which can be a video, image, audio file, a screen capture window (a separate window or application), or an external video camera.

Basically, the OBS Studio program is used to stream computer games, so the first step is to add a screen capture: click the plus in the lower left corner, then “Screen Capture”.

Next, set the necessary checkboxes at your discretion, save.

You can add a video or image using the same method, plus all this can be done by simply dragging and dropping into the “Sources” area.

You can add a camera in the same way, select the “Video capture device” item. The computer’s webcam should automatically be detected, and an additional capture card is required to connect an external video camera.

Avermedia’s most popular gaming capture cards , below is an option for 4K broadcasts, with which you can capture not only an external camera, but also a second device (laptop or PC).

We set the level in the volume of each stream in the “mixer” section, it is recommended to do this before the start of the stream so that there are no sharp changes between sources. Next, we deal with the management of the air. The whole system is divided into sources and scenes, it is quite easy to figure it out. To turn on the next source (from the preview), click “Transition”.

Now let’s get ready for the broadcast. To change the stream settings, go to File – Settings, then the “Output” tab. The video bitrate and resolution are set based on the goals of the tasks, if it is a stream of a computer game, usually more than 4500 is enough. You can set 6000, this is the maximum bitrate that the YouTube server manages to process.

Next, go to the “Broadcast” tab. To set up the broadcast, you can use the presets, but we recommend that you always do it in manual mode. Select “Custom Broadcast Server”, here you will need to enter the URL address of the server for broadcasting and the access key. Each service has a broadcast creation system that is approximately the same, below we will consider popular broadcasting services – Youtube and VKontakte.

Making a broadcast on YouTube is not difficult, for this you need to go to the “creative studio” section, select the “live broadcasts” section and click “create a broadcast” on the left.

Next, we write down the basic information: title, description, hashtags and set the start time of the broadcast. In the “advanced settings” tab, it’s better to leave everything by default and save the broadcast.

We are interested in the name and URL of the stream for broadcasting, copy these two lines into OBS Studio and start the live broadcast.

The broadcast will appear on Youtube in a few seconds. It is better to start with a preview, and only then turn on the stream for viewers.

Setting up a broadcast on VKontakte

In the VK LIVE service, creating a broadcast is even easier. You need to go to the video recordings of the group or user, then click “create broadcast”.

It is required to enter all the data by analogy with YouTube and start the stream.

VKontakte also has a preview function, which is recommended to use. The broadcast stream comes to the server, the administrator checks that everything is in order and only then opens the air for viewers.

Of the distinctive features of broadcasting on Youtube and VK: on YouTube, the maximum bitrate is 6000 kbps, VKontakte supports up to 9000 kbps at a resolution of 1920 x 1080 at 60 frames / sec. Plus, by default, VK LIVE decoding is disabled, those broadcasts will go with the stream that is stated in OBS. Because of this, users with poor Internet quality will not be able to comfortably watch the broadcast, it is recommended to contact technical support a few days before the start of the stream and ask them to turn on decoding.

More details about OBS Studio settings for VK streaming can be found in the official public page support.

Recommendations for hardware and Internet channel for broadcasting

For an uninterrupted broadcast at 3500 kbps, 8-10 megabits of outgoing speed is enough. The most important thing is the stability of the channel.

There are no unequivocal recommendations regarding the power of the computer, specifically OBS Studio is stable and consumes relatively little PC resources. Then everything depends on the number of sources. If a webcam is on the air, screen capture (programs) without recording, then even an average computer will be enough. Avermedia external capture cards consume CPU resources and drop frames if not enough. Here you need to look at the circumstances.

In general, OBS Studio is a great program that works stably and is easy to set up. Plus it is absolutely free and works on all platforms: Windows, Mac OS, Linux. It has all the options for streaming computer games, including background replacement.