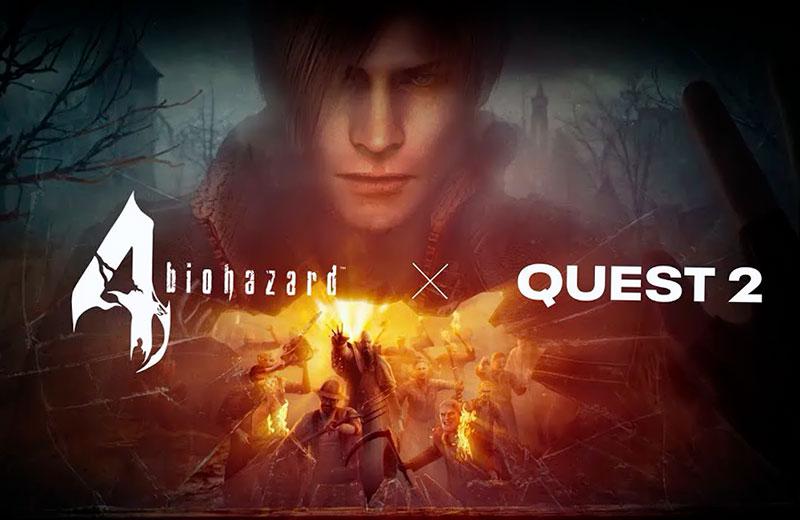 In all fairness, the adaptation of Resident Evil 4 to the VR headset ( VR Game engine VR Oculus quest 2 ) by Meta ) has raised some doubts. Unlike Evil 7, whose first-person gameplay naturally blended into VR, the QTE scenes and the over-the-shoulder shooting didn’t feel right for that.

Fortunately, the fears were unfounded, Resident Evil 4 VR on Oculus Quest 2  is pure pleasure. The developers did a good job on the first person game. The user interface, shooting mechanics, interaction with the world, and even Ashley’s behavior have changed. In RE4 VR, you won’t find such high definition as in Walking Dead: Saints and Sinners. But fans of this classic horror experience will be totally immersed.

The level of fear is, of course, lower than in the last two options. But the confrontation in the first person builds up such tension that the original version could not even dream of. Fans of shooters or survival horror games should definitely try this.

With all the changes it took to get Resident Evil 4 VR to work on Quest 2, this version sits somewhere between a remaster and a full remake.

Let’s compare Evil 4 VR to the original to see if it’s worth buying. Armature Studios converted the game to the Unreal Engine 4 while retaining the animation, geometry, storyline and core gameplay of the original.

The redesigned world now has the ability to pick up ammo and loot, aim with a weapon, turn doorknobs, turn keys, pull levers, and type on a typewriter. All this makes the game more atmospheric, although the basis remains the same.

In VR Games, everything mostly comes from Leon’s face. The original RE4 was conceived from a third person perspective, making it easier to spot enemies approaching and gauge their distance. Playing in the first person, you have to twist to find them in time. To facilitate this task, Armature has added spatial audio – it allows you to hear by ear from which side enemies are approaching.

Cut-scenes and QTE (dynamic scenes during which the gamer is required to quickly perform any actions with the controller) appear on the screen, surrounded by a black space. When Ganado (Infected Villager) grabs you, everything darkens briefly. Then it switches to the QTE window with a hint of what you need to do with the Touch-controller. After successful completion of the actions, everything returns to the standard view.

You can move around the world in two modes – Full Motion or Comfort. In the first case, traditional joystick movements are used, in the second, you teleport. I would recommend Full Motion if you can handle it. If you don’t want to be cut in half with a chainsaw, it’s best to be constantly on the move. Although I often feel nauseous in VR, I was able to endure two hours of playing in this mode at the cost of a little discomfort.

Armature Studios has created a “complete upper torso model” for Leon’s virtual body. A pistol, a weapon that must be held with two hands (shotgun, rifle or RPG), ammunition, a knife, healing items and grenades are located at certain points on the body, and they can be taken at any time. The vibration of the Oculus Touch controller tells you that you are over an object and creates a tactile sensation as if you are picking something up. The famous attaché case is still used to manage inventory, but this system allows you to spend less time on the menu and more on the game.

Aiming is now done using movements rather than a joystick, but the mechanics of destroying enemies remain the same. By pressing the button, you can strike from a roundabout, immobilize the enemy, make a shot or stab.

Combat actions have become more fun and realistic. To reload a pistol or rifle, you will need to insert a new clip and pull the bolt. The shotgun will have to be inflated after each shot and manually insert the cartridges when they run out. In the fight with Del Lago, you will have to throw a harpoon, dodging the debris and bites of a giant salamander.

The ammo gauge is now displayed on your wristwatch, which means you won’t have time to check it out in the heat of battle. At first, I often ran out of cartridges, and had to frantically reload. But gradually you will learn to keep track of your clips.

Armature even tweaked the behavior of Leon’s infamous companion Ashley, who may have been one of the main flaws of the classic RE4. She can be given orders quickly using Oculus Touch. More importantly, the developers changed the settings so that she dies less often: “The damage dealt to Ashley no longer matches the damage dealt to Leon – now she takes less.” In addition, enemies now target her less often than Leona, which makes it easier to maneuver while avoiding enemy attacks.

Many also point out a strange change: some dialogue in Resident Evil 4 VR turned out to be edited. Removed scenes of Leon harassing a Secret Service agent and Cop Luis making comments about Ashley’s “ballistics” (chest).

Conversations between characters are usually strictly businesslike and devoid of clumsy attempts to give them a brutal connotation. Even the family-oriented Nintendo did not require this for their ports. But Meta should have stricter rules on what might appear in the Oculus Store.

What we liked about Resident Evil 4 VR

Despite the gameplay changes and censorship, Resident Evil 4 remake retains everything that gamers love the original version for.

Capcom has succeeded in creating a wide variety of enemies that become more difficult to kill as you progress through the game. This does not let you get bored and forces you to master various combat strategies. Grotesque villains first destroy the scenery, and then try to devour you, and the character of Ada Wong even stole the cinema.

I’ve replayed Evil 4 more than once since I first played it on the Wii as a teenager. But that didn’t stop me from getting carried away with the Quest 2 version. Armature Studios did an amazing job. The first-person gameplay, dodging enemy strikes, increasing the accuracy of shots, manual reloading and aiming make it feel like I’m a Secret Service agent from an action movie and not just playing a video game.

First, the gamer is shown tutorials on controls and gameplay options. Since there is no real tutorial mission here, these videos eliminate the need to frequently look at help screens. Motion control was accurate 95% of the time. In vital situations, I easily took out pistols and cartridges from a shoulder or belt holster, and my knife strikes corresponded to the movements of my hands.

You can only complain about the ambiguous arrangement of knives and grenades. I reached for the knife, and pulled out the incendiary device and frantically tried to swap them while my opponent came to his senses.

Resident Evil 4 is considered one of the greatest games of all time. The VR version ( VR Play )breathes new life into it with a rethinking of controls that immerses you directly in the thick of things. What more could you ask for?

If you’ve played Resident Evil 4 before, then you know its strengths and weaknesses. If not, be prepared for Ashley to disappoint you.

Despite all the improvements, she still died many times from chainsaws, explosives and other attacks that you easily dodged. The rest of the game has very few flaws, so I’ll focus on the VR-specific issues.

Resident Evil 4 VR takes up 8GB of storage, a high figure for an Oculus games. But, although the size of the downloaded file is large, graphically it looks like it’s zero. The update did not give the HD look like the recent Xbox One / PC / PS4 versions. However, the outdated visual design was not a big problem for me. This is partly due to nostalgia and the fact that I’m used to the imperfect visuals of VR game ( T VR ).

Completing the campaign of this game will take you at least 15 hours. Playing this length with Full HD visuals would likely eat up your hard drive and significantly degrade its performance. It is certainly worth mentioning, although you will quickly get used to the graphics as you battle hordes of enemies.

I am also disappointed that there are no additional scenarios available in the main game. You will not find, for example, “Separated Paths” and “Ada’s Quests”. Perhaps the developers saved them for the DLC.

Now about censorship, which has already caused controversy. The dialogue in the original game certainly isn’t politically correct. Louis’ remark about “ballistics” is just one of the dubious lines that have become a holdover from the times. Signature humor definitely had a touch of sexism towards female characters. However, Facebook’s request to remove this dialogue does not seem like a good decision and raises questions about what other content the company considers controversial to appear in the Oculus Store.

The editing of the game is smooth enough that you will hardly notice the missing dialogue unless you’ve played Resident Evil 4 before.

Good news for newbies, Resident Evil 4 VR is a great starting point before moving on to more scary games. There is a separate storyline that anyone can enjoy, the controls and combat familiar to anyone who has played other first-person games, and a long campaign filled with challenging opponents.

Is it worth playing Resident Evil 4 VR

Have you played RE4 before? Try Evil 4 VR anyway. This transformable version has new mechanics that set it apart from the console versions, completely immersing you in the action. A small redesign made it look like RE7 and 8, and the changes were good for it.

I have no doubt that this game will quickly make it to the list of the best for the Oculus Quest 2, I recommend giving it a try!