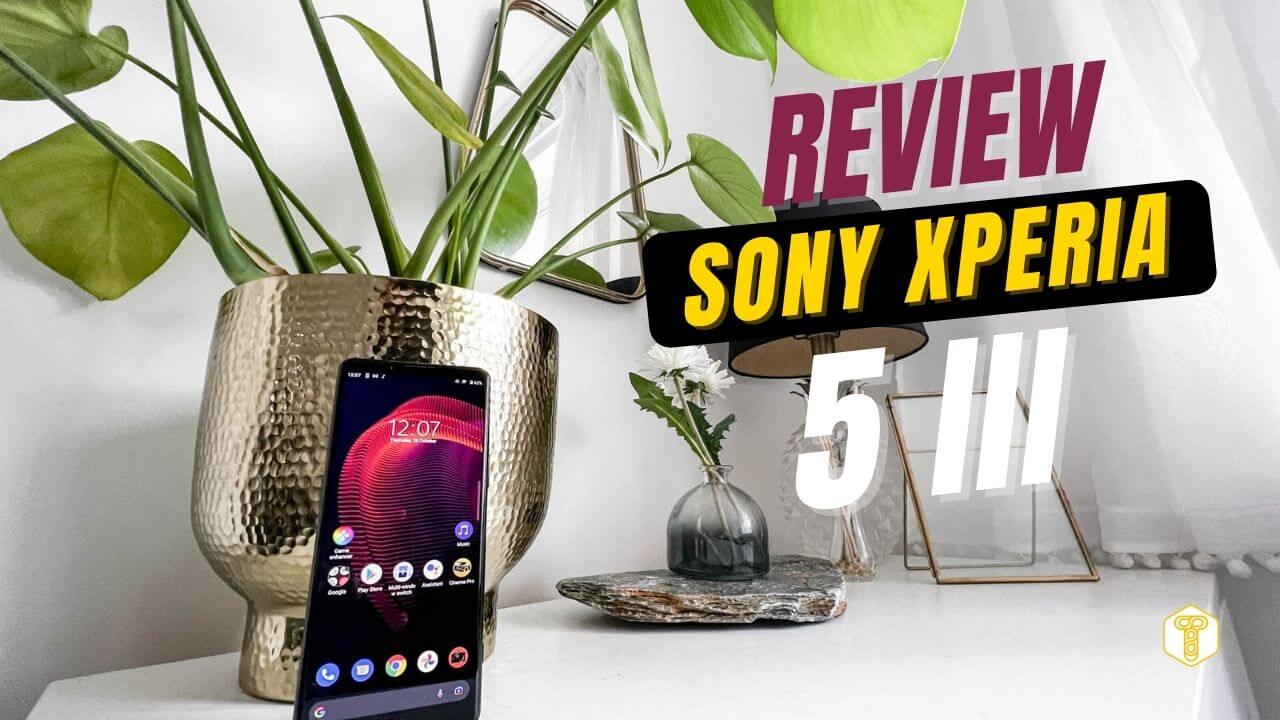 Sony smartphones have never been aimed at the widest target audience, and the Sony Xperia 5 III is another example of this. This model has an excellent display and powerful cameras, but for the best photos you will have to master the software well.

The Xperia 5 III is perfect for those looking for a compact Android flagship and loves mobile photography.

With the presentation, no surprises – the Xperia 5 III comes in the typical white box that Sony has been offering for a few years now.

The content isn’t extraordinary either – apart from the phone, we get:

Please note that retail units may differ in accessories and may have regional differences.

Like all the latest Xperia, the Sony Xperia 5 III looks unusual – the body is very elongated vertically due to the 21:9 aspect ratio.

The display is perfect for watching movies and the phone is comfortable to hold. In fact, the Xperia 5 III is a compact version of the flagship Xperia 1 III. That rare case when a small smartphone is all right with the characteristics.

There’s a 3.5mm headphone jack, and the front camera sits in a thick bezel above the screen. The same frame is on the bottom, which makes the smartphone seem even more “long”. But there is nothing superfluous on the display, and this contributes to the immersive effect when viewing content.

On the right side of the Xperia 5 III is a power button with a fingerprint scanner and volume keys, and just below there are separate buttons for shooting and calling the Google Assistant. Unusual here is even protection IP65 / 68 – the phone is not afraid of both water jets and immersion to a depth of 1.5 meters for 30 minutes.

The only thing that confuses is the quality of the SIM card slot. You can put either two SIM cards in it, or one SIM and one microSD memory card. The problem is that the SIM card does not hold well in one of the slots, and it will be problematic to use two numbers at once.

Unfortunately, the frequency is not adaptive – you can only choose between fixed values of 60 Hz and 120 Hz. Since this is an OLED panel, colors are saturated and blacks are as deep as possible. Sony offers a choice of two color profiles: Standard, with rich colors, and more natural Creator.

The latter is implemented in such a way that when watching movies and TV shows, you will see exactly the shades that the authors intended them to be. The white balance can be adjusted manually. As said, the 21:9 aspect ratio is excellent for watching movies, although the display isn’t overly large. Applications also adapt well to this ratio.

The phone can be seen as a replacement for a full-fledged DSLR rather than a point-and-shoot camera. There are three sensors with a resolution of 12 megapixels: the main one with optical stabilization, an ultra-wide angle and a telephoto lens with a 2.9x zoom.

The telephoto lens impresses the most – even when zooming in, high detail and excellent quality are retained. Optical stabilization helps, and the dynamic range remains wide, which is generally rare for cameras of this type.

The quality of shooting in low light is a little disappointing, and there is no separate night mode here. Therefore, night photos will often be of poor quality due to blur, low detail, or incorrect exposure. The flagships from Vivo and Google do not have such problems.

Sony is positioning the Xperia 5 III as a smartphone for professional photography, and the poor quality in low light is bewildering. The same goes for the 8 megapixel front camera – it does not impress with either quality or dynamic range.

There is a Basic mode in which you do not need to learn any settings – to take a photo, just press the shutter button. ISO, shutter speed, focus and other parameters are set in other modes. But because of this, in the Basic mode there are practically no settings left that have already become the standard for other smartphones.

Things are even worse when shooting video. The main application allows you to shoot only in Basic mode, and the rest of the settings are available only for photos. Moreover, you will not understand this immediately, because when you select another mode, the Xperia 5 III switches to photo mode without warning.

For more advanced video shooting, you will have to open the Cinema Pro application with a completely different interface. If you are familiar with Sony cameras, you will quickly figure out where to set ISO, shutter speed, color profile and focus. You can even shoot 4K/120 fps. However, in a regular application, there is no information about the frame rate, and it cannot be changed.

This abundance of settings is nice, but Sony should have paid more attention to the standard mode, which most buyers will use. A truly convenient application will seem only to professional photographers.

Sony has to be commended for having a physical shutter button on the body. It allows you to reduce shake when shooting, which increases the detail of photos. I would like other manufacturers to adopt this feature.

Although the shooting app does have its shortcomings, the software on the Sony Xperia 5 III is excellent.

Sony hasn’t announced a timeline for support for the Xperia 5 III, but the Xperia 1 III should have two major updates and it will most likely be the same here. You can count on Android 12 and 13, and it is not yet clear when exactly.

That’s not much for a modern flagship, and Sony should provide longer support for their smartphones.

With the Sony Xperia 5 III, the Japanese company took the same approach as Apple did with the iPhone 13 mini .

Although many manufacturers put not the most powerful hardware in their compact smartphones in order to reduce the price of the device, Sony did not do this. The top-level Qualcomm Snapdragon 888 5G processor and 8 GB of RAM are responsible for the high speed of the Xperia 5 III. The amount of internal memory is 128 or 256 GB.

In the GeekBench 5 performance test, the device scores 3020 points in multi-core mode. The result is not bad, but worse than competitors on the Snapdragon 888. Moreover, the model is inferior even to the Xperia 5 II released a year ago (3347 points).

However, when performing any day-to-day tasks, there are no lags, so there is nothing to worry about. But if you love mobile games, you might want to look elsewhere.

Sound is another aspect that Sony smartphones are famous for. The Xperia 5 III has both a 3.5mm headphone jack and stereo speakers.

Don’t forget Sony’s Dynamic Vibration. When watching a video or listening to music, vibration occurs, which enhances the “immersion effect”. The problem is that you can’t turn it off, and sometimes it distracts more than it “immerses”.

The Sony Xperia 5 III has many advantages over the competition, but battery life is not one of them.

The battery capacity of 4500 mAh is a standard indicator for most smartphones. The battery lasts about a day of normal use with a screen refresh rate of 120Hz. The charging speed does not exceed 30W – which is not comparable to OnePlus, Oppo or Xiaomi devices, where it reaches 120W.

The Xperia 5 III doesn’t come cheap, and there are plenty of other great models in the flagship segment.

The Sony Xperia 5 III is good in many ways: it has an excellent display, a lot of features for high quality sound and a small size. At the same time, the hardware here is at the level of flagships, and the cameras are not inferior to professional ones.

True, the battery life is average, the charging speed is far from the competition, and there will be few major system updates. Moreover, the cooling system does not do its job well – probably the reason for this is the compact case.

The decision to buy an Xperia 5 III depends on how well you know how to handle Sony cameras. If you are not a beginner, the interface of the application for shooting will seem familiar, and the abundance of settings will please. Otherwise, you will have to spend a lot of time studying the features of the software.