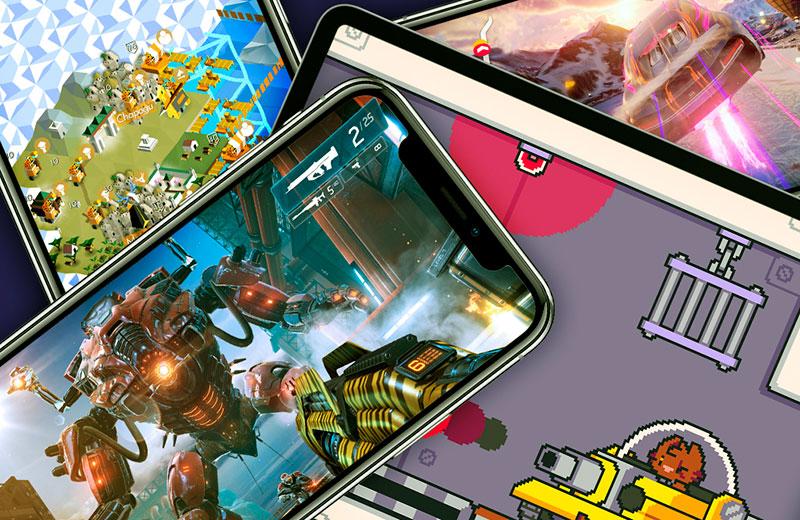 Do you like to play interesting games on your iPhone? There are many good and inexpensive games on the App Store, but many more are free. There is something interesting for fans of all genres: racing, shooters and puzzles. In that TOP 5, we have collected the best free iPhone games.

If you do not want to connect a bank card to your Apple ID or spend money on paid games – below are the best free mobile games for iPhone and iOS.

Crash Bandicoot: On the Run!

The Crash Bandicoot series needs no introduction – all video game lovers know it.

The first part appeared on PlayStation in the late 90s and the basic gameplay is still the same. This is an atypical platformer on iOS. In Crash Bandicoot: On the Run! the character runs forward himself, and the player only needs to perform jumps or attacks.

The controls are simple – to change the route, jump and slide you need to slide your finger across the iPhone screen. When you click on the display, the fox rotates or attacks. To complete On the Run! completely, you have to complete individual campaigns. Each of them is divided into stages with a final boss.

To defeat the boss, you need a certain amount of different resources, and to produce them you need to collect items during the game. The cooler the boss, the more resources will be needed, although over time, devices for their creation will appear on the base.

The visuals, while not really anything special, look nice. And Crash Bandicoot is famous not for its graphics, but for its addictive gameplay that allows you to kill time.

Asphalt 8: Airborne for iOS is another free-to-play version of the legendary series that debuted in 2004.

These are arcade car races: from ordinary Ford, Dodge and Chevrolet to the unique Koenigsegg Agera, Bugatti Chiron and Lamborghini Sian. Learning to control is easy, because the car itself accelerates, and turns are carried out by tilting the smartphone to the right and left.

Pressing the screen with the right thumb activates the nitro acceleration mode, and the left thumb activates the brake, which allows you to drift. Airborne has several modes. Chief among them is Career, which is divided into seasons. To proceed to the next stage, you need to collect stars by completing tasks.

For example, come first or perform certain tricks. There are also online modes, and there are always a lot of players. The graphics in the new part have become more beautiful, and the music is pleasant. The cars exactly repeat the originals, on the basis of which the virtual models are made, and the tracks are breathtaking.

Candy Crush Saga doesn’t have as rich a history as the previous two episodes. However, this is one of the best free iOS games.

It was released in 2012, and all this time it has been in the top of the most downloaded games in the App Store. Candy Crush Saga is a match 3 puzzle game. And candies are used as elements on the board. If you place at least three identical candies in a vertical or horizontal row, they will disappear, and the top sweets will take their place.

The longer the row, the more points you get. If you connect a lot of candies at once, bonuses will appear. They will allow you to score even more points. The phenomenon of the game lies in the simple gameplay, although the levels become more difficult over time. The visual design is nicely done, and the music matches the mood of the game.
But beware – Candy Crush Saga is addictive. And there are so many levels that it is very difficult to reach the last one.

Don’t know which game on IOS to download for free? Take a look at Crossy Road, which debuted on iOS back in 2014.

The gameplay is simpler here than in Candy Crush Saga. At first you play as a chicken, but then other characters open up: a butterfly, a penguin and even a telephone booth. You need to go as far as possible, crossing roads, rivers and railroad tracks. Everything would be fine, but they are constantly clogged with vehicles, any collision with which will kill you.
Moreover, you cannot wait long for a convenient moment – the border of the world is constantly approaching you from behind. If you take three steps back, an eagle will grab you. Visually, Crossy Road resembles Minecraft. Here are voxel graphics that are perfect for simple gameplay. In terms of sound design, the game seems to have come from the world of retro consoles Dendy and Sega.

The Score series was born in 2012 and was developed specifically for smartphones running Android and iOS.

This is a soccer simulator where you have to lead the player up the career ladder. Moreover, the gameplay has nothing to do with FIFA and eFootball (formerly known as Pro Evolution Soccer). First Score! Hero 2 you choose one of the teams.

It is not necessary to play entire matches – the player can only complete individual episodes with the participation of his player. To draw the trajectory of the ball, you need to slide your finger across the smartphone display. So you will perform various passes, free kicks and shots on goal.

Score! Gameplay Hero 2 is not the easiest, and it takes time to master everything. This is a great alternative to the more popular iOS soccer games.

There is no single answer, everything is individual. Let me know in the comments what free popular iPhone games you know. Are there any of our proposals among them?