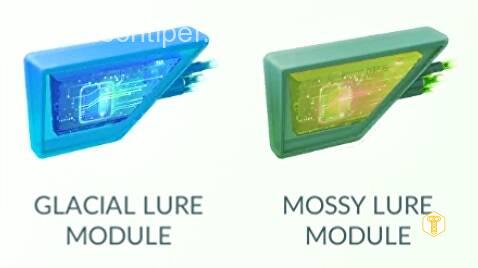 The usual lures in Pokemon Go are present in the game from the very beginning, but thanks to several Lure modules related to the elements – Glacial Lure, Mossy Lure and Magnetic Lure – it is possible to catch creatures of various types.

In May 2021, the list of lures was expanded to include Rainy Lure, which helps catch and evolve more Pokemon.

Below, we explain how to get Rainy Lure, Glacial Lure, Mossy Lure and Magnetic Lure, how the new modules work in Pokemon Go, and most importantly, what creatures you get with them.

Glacial Lure, Mossy Lure and Magnetic Lure lures – how do the modules work?There are four Elemental Lure Modules available in the game:

When you use decoys in PokeStop, you have an increased chance that certain types of Pokémon will appear around. It is worth knowing that not all Pokemon can be summoned with Lure, and there is no Pokemon that appears only after using a decoy.

Each decoy can also be used for evolution, with some transformations only available after using a specific type of module. Thanks to the lures you will get:

As a reminder, both Leaferon and Glaceon can also be obtained by evolving Eevee .

How to get Glacial Lure, Mossy Lure and Magnetic Lure

Currently, the only way to get Glacial, Mossy and Magnetic Lure is to use the in-game store and buy modules for 200 coins.

In the past, baits also appeared as one-time rewards in certain quests, so keep an eye out for special challenges. For example, at the time of Rainy Lure’s debut, the final stage of the concurrent Luminous Legends X event offered her as a reward.

However, it is worth remembering that using the decoy affects all players around you – if one of the users used a Lure near you, you can use it.

Ordinary lures in Pokemon Go are nothing complicated: they are items that we use on PokéStop, thanks to which they increase the frequency of wild Pokémon appearing for a while.

We get decoys mainly by shopping in the in-game store – as individual items – but Lure can also be found in boxes, which are often available for purchase.

Sometimes you will also get decoys as a reward for leveling up, same as with incubators or Lucky Eggs, but that doesn’t happen very often.To use a standard decoy, simply click on the PokéStop and then on the little white icon above the disc. Here you will be able to add Lure from your inventory. Usually, the decoys last 30 minutes, but during some events (such as Community Day) the time is extended to several hours.