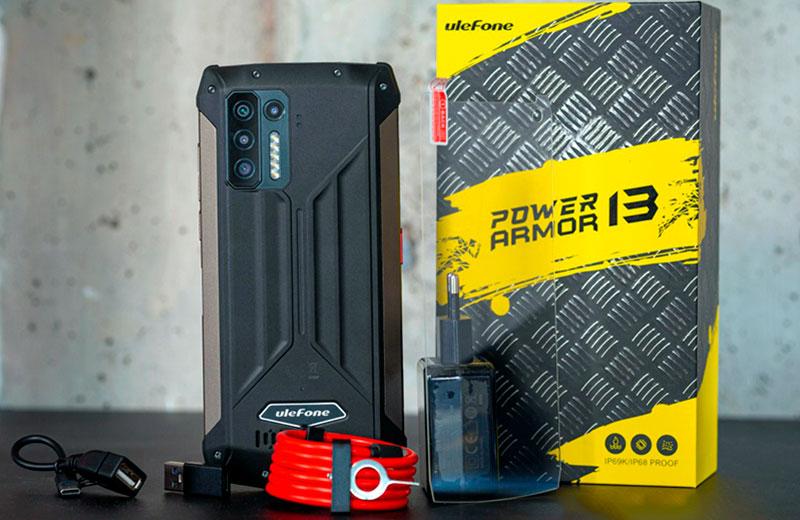 Ulefone Power Armor 13 rugged smartphone that does not require charging for a long time, thanks to a large battery with a capacity of 13,200 mAh. Although the phone is not for everyone, it has unique features, it is a real “Swiss knife” for any conditions.

Like the previous Armors, the model focuses on protecting the case from shock and water, as well as on the maximum set of useful tools: an endoscope, a flashlight and even a laser rangefinder. However, this is not easy Armor, and Power Armor, because there is a giant 13,200 mAh battery. The smartphone supports 33W fast charging, 15W wireless charging and even 5W reverse charging.

The rest of the specs are also good: a large 6.81-inch IPS LCD display and a MediaTek Helio G95 processor. 8 GB of RAM and 256 GB of internal storage, which is enough. The only drawback is the weight, which is 492 grams, and the thickness is 2 cm. But the device was not conceived as a cheap alternative to the iPhone or Galaxy.

Ulefone always packs a lot of accessories with its smartphones and the Power Armor 13 is no exception.

The box along with the phone contains:

You can optionally buy a 15W wireless charging dock and an endoscope with a camera. In addition, a shockproof case with a snap hook is also sold separately.

Of course, the main reason for buying the Ulefone Power Armor 13 is its rugged design and case protection. If you want a smartphone that can survive the apocalypse, this is the right option.

The device is so reliable that it is difficult to describe all the features. There is IP69K and MIL-STD-810G protection – the device is not afraid of water, dirt and shocks. IP69K means that the phone can not only be immersed in water to a depth of 1.5 meters, but also washed under high pressure water. All connectors are covered, and the panels are screwed to the body with screws.

The outer layer of the back cover is made of plastic, underneath is metal. The lid is full of screws, the Ulefone logo on the bottom, a speaker and a quad camera module. To the right of the cameras are five LED-LEDs that function as a flashlight or flash when shooting. On the top side of the Power Armor 13 is a laser rangefinder that is controlled via a separate app.

There is a 3.5mm headphone jack and a USB-C port on the bottom, both covered with a rubber cap. A microphone is also located here. On the left is a hybrid SIM card slot, endoscope connector and customizable key. It can be assigned an action for a single or double tap, and among the available functions: voice recorder, flashlight, screenshot, underwater shooting, SOS signal, walkie-talkie (Zello application) or launching any other application.

The right side of Ulefone houses the power and volume keys, as well as a separate fingerprint scanner. The dimensions of the device are impressive: 18.37 × 8.54 × 2.08 cm, weight – 492 grams, it is difficult to use a smartphone with one hand, and it is not suitable for ordinary pockets. The most convenient way is to attach your phone to a belt using a special accessory.

The 6.81-inch display is covered with Gorilla Glass 3, and there is a hole for the front camera in the upper left corner. It’s unclear why Ulefone didn’t fit it in the top bezel, since it’s huge. Above the screen is a grill with an earpiece, and in the right corner there is a notification LED.

There is HDR10 support, but only on YouTube, so the videos don’t look too saturated. To improve the quality of consumed content, only Widevine L3 protection has been added, so you won’t be able to choose a quality higher than SD on Netflix and Amazon Prime. The Power Armor 13 does not have the best tint accuracy, although the display shouldn’t be the strongest point of a rugged phone.

On the back of the Ulefone Power Armor 13 there is a module of four cameras: a 48 megapixel main camera, an 8 megapixel ultra wide-angle one, a macro lens and a 2 megapixel depth sensor.

At the front is a 16MP front-facing camera for selfies. Pictures from the main sensor are saved at 12 megapixels, and their quality is far from ideal. Everything is fine in the center of the image, but objects are blurred at the edges and corners. At least the contrast is high here, and there is almost no noise.

The shades are greenish and not as saturated as we would like. There is a digital 2x zoom, in which the image is simply enlarged, cropped and subjected to quality improvement algorithms. The ability to shoot in 48 megapixel mode is also available, but there is little sense in that.

The 8MP ultra-wide-angle camera allows you to take group photos, and the depth sensor helps with portraits. The macro lens has a fixed focus at 4cm, so it is difficult to get a good shot. In addition, the colors are too purple and faded.

All standard Android apps and several Ulefone programs are included: FM Radio, Notes and Tools. It is in the last application that the main functions of the device are located: compass, level, flashlight, altimeter, magnifying glass, alarm clock, sound level meter and others.

The installed Rangefinder application allows you to measure distances and take into account or not the height at which the smartphone is located. There are also functions for measuring volume and area. The problem is that the rangefinder is not very accurate – it is mistaken by 0.5–1 cm. Probably, the point is in the protruding bottom side of the case, where the headphone jack and USB-C port are located. This is a weird design decision for which I have no explanation.

It has eight cores: two high-performance Cortex-A76 clocked at 2.05 GHz and six energy-efficient Cortex-A55 (2.0 GHz). The graphics work with the Mali-G76 MC4 cores, and the LPDDR4X RAM – 8 GB. Although the internal storage is 256GB, it is expanded via microSD cards.

Helio G95 is far from the flagship processors, however, its overall performance is not bad. In GeekBench 5, the device scores 502 points in single-core mode and 1610 in multi-core. The graphics test GFX Car Chase ES 3.1 (onscreen) gives 18 fps, that is, Power Armor 13 will cope with simple games without problems.

The Power Armor 13 has one speaker, it is located on the back of the smartphone.

The volume of the audio output is high when the phone is turned face down. But, the sound quality is mediocre: you can hear mainly the mids, and not the treble or bass. I’m glad we at least have a 3.5 mm audio jack.

One of the most important advantages of the Power Armor 13 smartphone from Ulefone is its endurance.

The battery capacity is 13,200 mAh, which is why the case is so thick and heavy. Battery life, incredible: 40 hours surfing the web or 33 hours watching videos. Supports Power Armor 13 and 33W fast charging via the included adapter. In 30 minutes, 27% of the battery energy is restored, which is a good result for a volume of 13,200 mAh. A full charge will take a little over three hours.

15W wireless charging is supported, although you need to purchase a docking station from Ulefone for this. There is no reverse charging via cable, although for some reason there is a wireless reverse. The phone can be used as a power bank for other smartphones and smartwatches with induction charging when placed on the back cover of the Power Armor 13.

There are many useful tools like a laser rangefinder and an endoscope, although these unique features are far from perfect. The quality of the display and cameras is average, however, hardly anyone will buy it for the sake of this.

However, the phone is protected, but large and heavy, so it is not suitable for everyone. It is worth buying it for those who work in difficult conditions and constantly risk damaging their gadget. Among shock-resistant smartphones, Ulefone’s Power Armor 13 is a good choice.