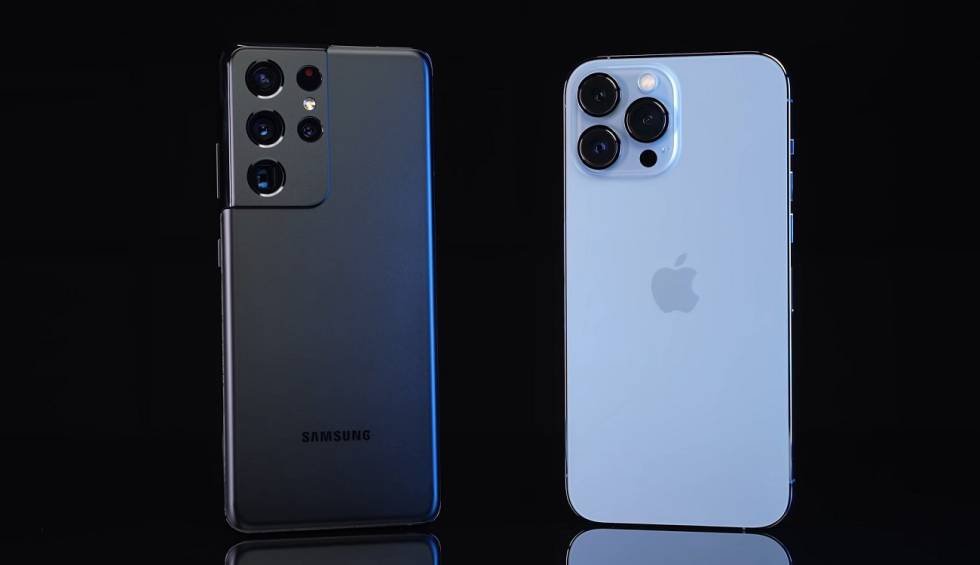 Let’s compare these two popular flagships and see who is better.

The iPhone 13 Pro Max and Galaxy S21 Ultra look and feel different. But the iPhone appears to be larger due to its flat display with noticeable borders, while the Galaxy has a slightly narrower screen.

The smooth, shiny sides of the iPhone are nice looking, but they don’t feel as comfortable in the hand as the slightly curved sides of the Galaxy. The iPhone is slightly heavier again – the 13 Pro Max weighs 240g versus 229g for the S21 Ultra.

The iPhone has an OLED panel from Samsung. The company has maintained a leading position among display manufacturers for the past few years. Along with the Panel, the 13 Pro Max gets the 120Hz refresh rate that debuted on the Galaxy in 2020.

Measurements showed a higher peak brightness on the iPhone, above 1000 nits, while the Galaxy screen only reported 889 nits.

Official figures show the opposite. However, it’s worth noting that testing was done at 100% white on screen. This may be the reason for the differences between our results and those published in other reviews. Many people test at 1% white level.

The Face ID cutout on iPhones has been a sore spot on Apple smartphones and has often been ridiculed by Android fans.

All models of the 13th generation iPhone have a “bang” less by 20%, which is good news. As for biometrics, the differences are still dramatic. The iPhone doesn’t have a fingerprint reader, just Face ID. Galaxy has an on-screen fingerprint scanner and image-based 2D face recognition.

Unlike previous generations of Galaxy, the S21 Ultra uses an ultrasonic fingerprint scanner. But it, in comparison with traditional ones, seems slower and less reliable. Face ID on the 13 Pro Max works the same way as on previous models, although using it with a mask is still very difficult.

Both the iPhone 13 Pro Max and the Galaxy S21 Ultra have a main camera and an ultra-wide-angle camera.

Apple has updated the sensors and lenses on the iPhone 13 Pro Max, using a much wider aperture for the main and ultra wide-angle cameras to improve nighttime performance. As the main camera, the iPhone received a 12MP wide-angle camera with a focal length of 26mm and an aperture of f / 1.5.

Apple has a new feature – photographic styles, or smart filters, which are customizable and can be applied to the entire photo or to individual parts of it. Samsung has only standard features.

The main Galaxy camera has a wider grip, brighter colors in the photo, higher exposure. On the iPhone, shots are more contrasty, with deeper shadows. Shooting with 3x zoom gives very close results. But the Galaxy undoubtedly outperforms the iPhone with its 10x optical zoom.

Both take decent photos in low light conditions. In Galaxy shots, colors are slightly muted. The iPhone, on the other hand, increases saturation and brightens the image. However, the Samsung smartphone does not have a night mode for the ultra wide-angle camera. iPhone takes cleaner photos with a similar camera.

Both smartphones now support macro mode for both stills and videos. Previously, this mode was not available on the iPhone. Special mention should be made of the Cinematic Mode function for video on the iPhone, which automatically changes focus while shooting. Moreover, you can change the focus on an existing recording made with the iPhone 13 cameras. No other flagship can do that.

Another difference between the 13 Pro Max and the S21 Ultra is the LiDAR scanner, which makes it easier to focus when shooting portraits at night. Galaxy doesn’t have that.

Both Apple and Samsung are pushing buyers towards wireless headphones, as neither of the phones has a wired jack.

Both phones are equipped with a dual speaker system: the main speaker comes out from the bottom, the additional one is located in the earpiece from the top. This is where the similarities end. The sound quality of the Galaxy S21 Ultra is disappointing. There are no complaints about the volume level, but the sound seems to be poorly balanced, it lacks depth.

The iPhone has richer sound, with much more bass definition (as much as a phone can), while maintaining good mids and highs. For lovers of high-quality sound, the iPhone is the best choice.

Apple’s smartphone processors are leading in performance, and the iPhone 13 Pro Max, with the new Apple A15 Bionic chip, is the fastest smartphone ever.

The US Galaxy is equipped with the Qualcomm Snapdragon 888, while the international models are equipped with the slightly slower Exynos 2100 from Samsung. The lag in data processing speed is partly compensated by the amount of RAM, 12/16 GB of RAM (the iPhone has only 6 GB) is more suitable for multitasking.

Below are the benchmarks for the A15 compared to the Exynos 2100.

It is clear that Apple has further increased its lead over its Android competitors. The A15 is built with the same 5nm technology as the A14, but Apple claims the A15 has 50% faster CPU and 30% faster GPU than the competition.

Comparing GPU performance, we can see that the iPhone 13 Pro Max is significantly ahead of the S21 Ultra. In the 3D Mark Wildlife Extreme test, the iPhone scores 3000 points, which is three times higher than the Galaxy. It can be argued that this is the best GPU of all 2021 phones and no other comes close.

The built-in memory of these phones is the same: basic models have 128 GB of memory, for models with 256 GB or 512 GB you will need to pay extra. The iPhone 13 Pro Max is rumored to ship with 1TB storage. Keep in mind that unlike previous models, the Galaxy S21 Ultra does not offer expandable storage.

While battery capacity has increased across all 13th Gen iPhones, the Pro Max has the largest battery.

Apple did not disclose the battery capacity, disassembling the device, it was possible to find out that the Pro Max is equipped with a 4352 mAh battery. The Galaxy battery has a capacity of 5000 mAh. However, the energy efficiency of Android and iOS is different, so it is wrong to estimate only capacity. Let’s compare the test results. Both phones do not have headphone jacks. The iPhone uses the Lightning port to charge, while the Galaxy uses the industry standard USB-C.

The Pro Max’s battery life is impressive and noticeably outperforms the Galaxy S21 Ultra in similar tests. In terms of a charger, neither Apple nor Samsung include one in the box. The fast charger will need to be purchased separately.

Unfortunately, none of the smartphones surprised us with the charging speed. Connecting a 20W device took an iPhone 2 hours to fully charge the battery. Samsung Galaxy charges much faster, just over 1 hour was enough. But that’s still a lot more than the 30 minutes we get from brands like OnePlus.

Comparing Apple iPhone 13 Pro Max and Samsung Galaxy S21 Ultra once again demonstrates that they are still two completely different devices. Both are superior in their class and offer impressive capabilities.

Determining which one is better is difficult. But for recommendations, we would recommend the iPhone 13 Pro Max to those who love iOS and Apple’s ecosystem. And also for those planning to use AirPods, Apple Watch, or working with a Mac computer to easily transfer files via AirDrop. Plus, the iPhone remains unsurpassed in gaming performance and battery life.

On the other hand, the Galaxy S21 Ultra is an obvious choice for those who appreciate the openness of the Android ecosystem and the fact that it does not limit you to specific products. The Galaxy offers more customization, is more compact and is easier to operate with one hand. In addition, it has a huge advantage in the form of a 10x camera zoom.