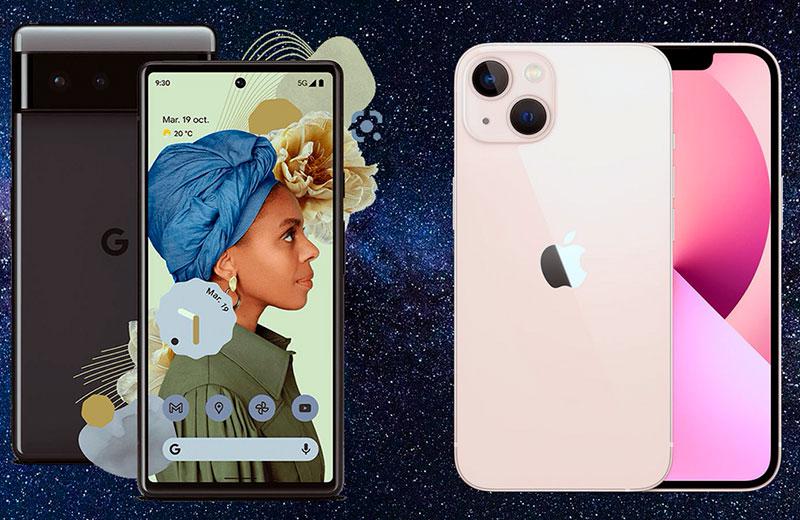 Pixel 6 is a complete refresh of the Pixel lineup, both in terms of design and technical equipment. Google’s own Tensor processor delivers a welcome leap in performance. And a completely new camera system – great shots in different conditions.

The iPhone 13, by contrast, is a revised version of last year’s iPhone 12. The processor and battery have increased. Cameras have been updated, new options have appeared, for example, the Cinematic Mode for video. The design remained unchanged.

Let’s compare these two flagships in more detail and see if Google has beaten the iPhone?

Pixel 6 vs iPhone 13 Design and display

The biggest difference between the Google Pixel 6 and the Apple iPhone 13 is physical size. The Pixel is wider and taller than the iPhone.

The Pixel has significantly larger bezels than the iPhone. However, the iPhone has a noticeable notch, while on the Pixel, the front-facing camera is located in the opening of the screen.

The Pixel has a 6.4-inch flat screen, while the iPhone has a 6.1-inch display. By the way, this year Face ID on iPhone has become 20% less. Both phones use OLED panels with excellent contrast, deep blacks and great viewing angles. The iPhone has a slightly higher peak brightness. This makes it more convenient for outdoor use on a sunny day.

The Google Pixel 6 has a refresh rate of 90 Hz, which gives it a slight advantage over the iPhone 13. The latter uses the traditional 60 Hz, which does not provide, for example, the same smooth scrolling.

Both devices are completely glass. Both panels – front and back – are made of tempered glass. The iPhone uses Ceramic Shield and the Pixel uses Corning’s latest Gorilla Glass Victus.

In addition, both phones are IP68 water resistant. And none of them support a headphone jack.

Pixel 6 vs iPhone 13 Comparison of cameras

On the back, both the Google Pixel 6 and Apple iPhone 13 have two cameras: the main one and the ultra-wide-angle one.

There is no dedicated telephoto lens, so the zoom quality is inferior to that of the larger phones. The camera system has been updated for both flagships. The iPhone has a new main camera that lets in more light thanks to its very wide aperture. This improves the quality of shooting in low light conditions. The stabilization has become better.

The Google Pixel 6 has more noticeable differences from its predecessors. This is the first camera update in the past few years. Significantly enlarging the camera sensor has improved the quality of shooting moving objects and recording HDR video. Google has also addressed the overheating issue with previous Pixel models during video recording.

In the daytime, both the Google Pixel 6 and Apple iPhone 13 take decent pictures. However, there are nuances that are worth paying attention to.

We noticed that when there was a lot of green in the frame, the picture taken with the Pixel camera took on a yellowish tint. The iPhone is much better at white balance.

Plus, the Pixel has a very aggressive frame-processing algorithm that raises shadows a lot. As a result, the photographs are flat. IPhone shots are more contrasty. And the new Photo Styles option allows you to customize filters according to your preferences.

Another iPhone 13 update is about video recording. A special Cinematic Mode blurs the background during recording and also smoothly brings focus in a “cinematic” way. Although the option only records video in 1080p 30fps and does not work in 4K, for the first time the focus on a video can be changed even after recording.
In our opinion, the iPhone is still better at video shooting. Google has closed the gap, but the iPhone provides sharper and better video stabilization. It also outperforms Google in low light photography.

Pixel 6 vs iPhone 13 Performance and memory

Apple has been making its own processors for the iPhone for almost 8 years. The iPhone 5s, released in 2013, was the first phone to feature an Apple chip. The company has traditionally led the charts when it comes to phone performance thanks to its absolute control over hardware and software.

Google is just embarking on this path by ditching the Qualcomm Snapdragon processors. They have been used in the company’s phones for the past few years. The Pixel 6 is the first phone to use Google’s mobile processor, codenamed Tensor.

Comparison of parameters shows that the performance of Tensor falls short of the latest Apple A15 or Snapdragon 888. Currently, Tensor outperforms some mid-range chips. But Google is betting on the power of AI and machine learning.

The Pixel 6 comes with 8GB of RAM, while the iPhone 13 has half that size at just 4GB. And the Pixel theoretically delivers smoother multitasking.

Both phones do not support microSD cards for expanding storage. Therefore, throughout the entire service life of the devices, you will only have the amount of built-in memory at your disposal.

Compared to the previous model, the battery capacity of the iPhone 13 has increased from 2815 to 3227 mAh. Google Pixel 6 is equipped with a battery with a capacity of about 4600 mAh.

Keep in mind, however, that iOS is more energy efficient, especially in passive mode. We conducted independent battery tests on both phones. The Pixel 6 lasted longer on both streaming video and continuous web browsing. But the advantage was negligible.

Google followed Apple’s lead and the Pixel 6 now ships without a charger too. The maximum wired charging speed for iPhone is 20W. The Pixel 6 supports speeds up to 30W, which is significantly faster.

The Pixel 6 is available in the US and a few other countries, but it’s hard to find it in the international market. The iPhone is much easier to buy, the phone is sold all over the world. In any case, the choice is yours. Which would you prefer – the more affordable Pixel 6 with a larger screen, faster refresh rates and an improved camera? Or a more compact iPhone 13 with the iOS ecosystem?

Whatever you choose, this will be one of the very best smartphones available today.