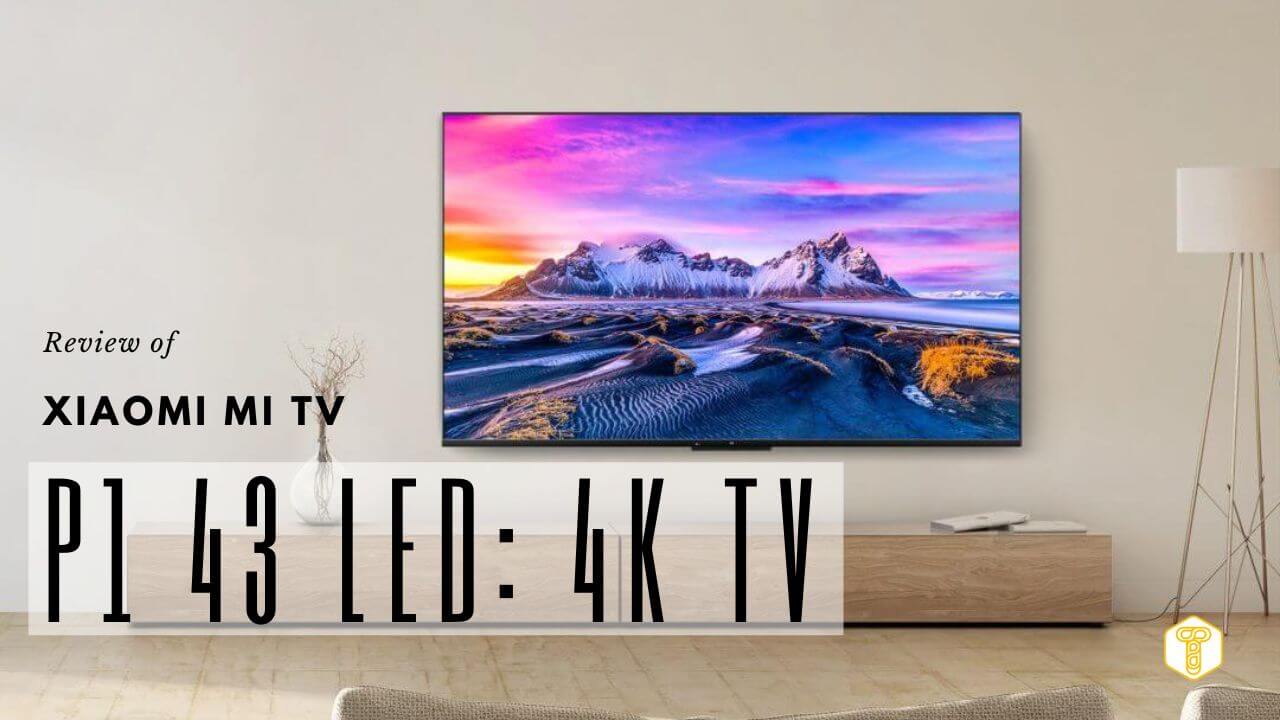 Xiaomi Mi TV P1 43 LED is a new 43-inch 4K TV model. Its predecessor from 2020 performed very well and received many recommendations. Will this version follow in the footsteps of the previous one?

The Mi TV P1 43 LED model also has the designations L43M6-6AEU and MiTV-MOOQ0. The test version is running Android 10 TV and has QTG3.200305.006.3005 software installed. In addition, I want to add that it was made in Poland, although Chinese versions are mostly common in our market.

Please note that the higher the contrast ratio, the better, the average color error below 3.0 is very good, and below 1.0 is excellent. The larger the coverage of the UHDA-P3 space, the richer the colors, which means brighter and more attractive.

In terms of design and style, Xiaomi Mi TV P1 43 LED does not differ from its counterparts, that is, 32- and 55-inch models.

The back wall is made of metal, while the covers of components and speakers are made of plastic. The case rests on legs made of black shiny plastic, and the distance between the uprights is fixed at 843 mm. The frame around the screen is made of black glossy plastic, its width is 2 mm.

Despite the HDMI 2.1 option visible in the menu, Mi TV P1 43 LED does not have this type of connector.

In general we have:

This type of matrix provides good color reproduction at angles, although at the cost of lower native contrast than VA sensors. The thermogram showed that there is a direct backlight, which in principle is the norm for TVs in this price range.

As with the 32-inch or 55-inch models, the factory settings for most picture modes were too high for the white temperature (11000-13000K). Traditionally, the best mode turned out to be video, in which I took all the measurements.

According to the subjective opinion, the colors are bright, but at the same time quite natural. The red color is too saturated, especially at levels 60 and 80%, which made the image a little more alive. But, colors do not lose their properties depending on the matrix used.

The ANSI contrast ratio was 1321:1, which is a relatively low result, although better than IPS panels with a typical 800:1 contrast ratio.

In other words, blacks and contrast are not the main selling points of the tested TV. This means that the Xiaomi Mi TV P1 43 LED is generally best for daylight viewing in a medium-bright room, or with the lights on.

After determining the type of low-contrast matrix, I was a little worried that the manufacturer would use different contrast enhancers. Fortunately, my fears turned out to be in vain, in Mi TV P1 43 there is no artificial darkening of the frame.

Support for HDR content is not a strong point of Xiaomi Mi TV P1 43 LED.

In the area occupying 10% of the screen area, the maximum brightness (three minutes after the start of measurement) was 324 cd/m^2, which is below average. Adaptive tone mapping is almost non-existent. The TV can distinguish details up to 10,000 cd/m^2 (the upper limit of HDR), even when the metadata contained in the signal has a ceiling of 1000 cd/m^2.

Instead of brightness, at 10,000 cd/m^2, the reviewed Mi TV P1 43 LED shows just over 320 cd/m^2. In other words, the TV does not lose bright details, but shows them much darker than they should be. The brightness response in HDR mode was also largely inadequate: it was highlighted in almost the entire tonal range and, where it should be smooth, turned out to be very wavy.

Finally, it’s worth noting that in HDR picture mode, the panel doesn’t maximize backlighting, which should happen automatically. Here the value is set to 80/100 instead of 100/100. Luckily, you can (and should) fix it manually.

Xiaomi Mi TV P1 43 LED uses a 60Hz LCD, so the maximum sharpness of moving images (in all anti-aliasing modes) is very low.

Anti-aliasing here is weak-medium, but there is no dirty screen effect. The undoubted advantage is a feature called “motion smoothing”. It has the following options:

The version of Android 10 used in Xiaomi Mi TV P1 43 was acceptable and quite smooth, the TV never froze.

As befits Android, the choice of applications is very large, although it differs significantly depending on the Polish or Chinese assembly. Here is the video software in my model:

Alas, the same software error occurred to me every day during testing. Well, after a longer downtime (for example, overnight), the receiver turned on again to increase the backlight, that is, it shone with the maximum available brightness. Unfortunately, the brightness of the backlight cannot be reduced, even by moving the slider to the left and right – the brightness will not decrease.

The only solution I could find was to use the “reboot” option (system settings/device settings/info/reboot). It was a reboot (not a reinstall) that solved the problem. It’s unfortunate that the problem occurs daily.

In general, the sound is average, with a slightly pronounced bass, while non-aggressive, bloated or muffled. We have 5 preset sound modes at our disposal: standard (the most pleasant), cinema (similar to standard, but with emphasized bass), news, game and own (with 7-level equalizer).

In general, for an affordable TV, the sound is acceptable, although below average. In my opinion, the model is not suitable for listening to music, although it is quite suitable for news and other TV shows.

Technically, the Xiaomi Mi TV P1 43 LED is a different TV than previous versions (perhaps because the OEM is in a different factory). It has many advantages, including high-quality multimedia, a clear picture, bright, but at the same time natural colors with good value for money.

Conditionally, the model is great for viewing in medium-light rooms or with the lights on.

TV Mi TV P1 43 LED from Xiaomi could be safely recommended, if not for a few bugs in the software. I hope that the manufacturer will fix them with the next software updates.

The biggest advantage of the Mi TV P1 43 LED TV is the price and ease of use. Image reception from different sources is decent, and the speed of Smart TV is not satisfactory.