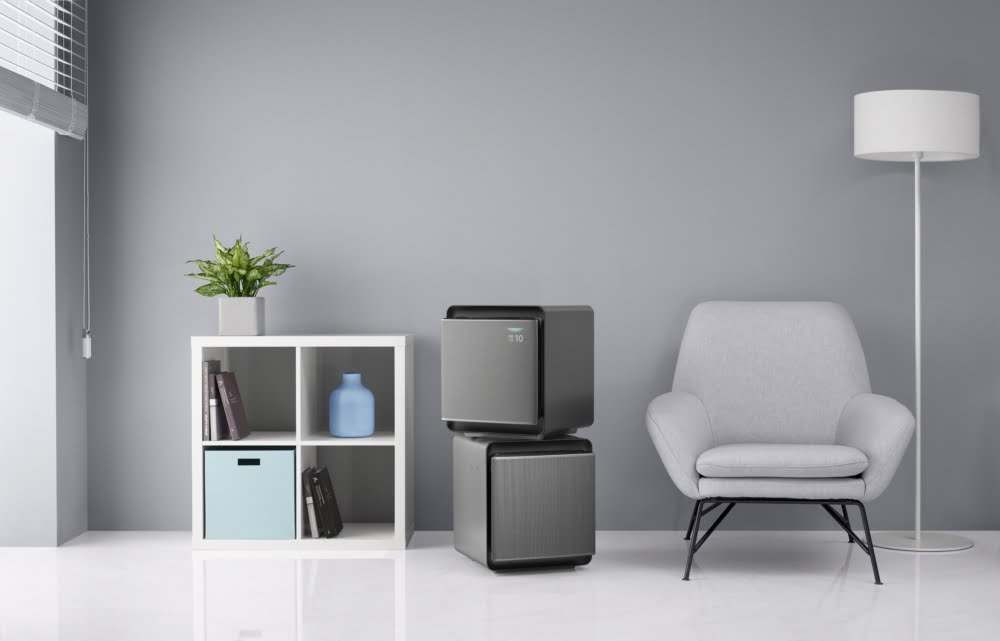 Samsung AX47 is a higher class air purifier that is able to cover a room with an area of ​​47 square meters by itself. We can also stack it with another device of the same type to support larger rooms. Nowadays, taking care of air quality is very important, so it is worth taking an interest in this category of equipment.

The quality of workmanship and the price of the Samsung AX47

The Samsung AX47 looks a bit like a miniature refrigerator. It is a cubic cube made of metal. The only plastic parts are the air outlets on the retractable element at the front and the rear cover with filters.

Its appearance is very universal and makes it suitable for most rooms. Well, maybe apart from the baroque ones. Dimensionally, it is quite large, but having it under a desk 80 centimeters deep was not a problem for me.

Do i need an air purifier?

In my opinion, it’s not like I need or don’t need it. If I had to choose what I value the most in life, I’d say clean air. And that’s what purifiers provide. As many of us know, the air in many places in India is not of the highest quality.

Now that the heating season is over and we are struggling with high winds, this problem is much less. It doesn’t mean he’s still gone. The Samsung AX47 was good at reducing air pollution in my apartment, but more on that in a moment.

They also significantly reduce the amount of dust in our apartment, which is a big problem for allergy sufferers or people who simply want to keep their apartment tidy. Some of them, like AX47, also mask many unpleasant odors that arise in the apartment.

Specification of the Samsung AX47 purifier

Does it even work?

Yes, it works, and that’s very good. Apart from the automatic mode, which activates the second speed level practically as soon as the orange color pops up. If the air quality level is very bad, it will switch to the highest speed right away.

I ran a few simpler, more common tests and, by chance, one much more demanding. When I started Samsung for the first time, it showed me values ​​around 50 um / m3 for all amounts of pollution.

Another attempt on a less windy day was to open all windows for a few hours. After turning on the purifier, the value from around eighty dropped to the range 5-8 in 45 minutes.

The most difficult test, which was created by chance, was a small party. Which was associated with two strong e-cigarettes as well as one IQOS in the room. All the impurity values ​​quickly reached the maximum level on the display, 999.

The automatic mode that was on then aggressively turned on the fastest fan mode, which was associated with a very loud hum. However, it only took a few minutes’ break from smoking to drop to the medium level, and then to the lowest level.

When more smoke appeared in the living room again, I decided to turn off the automatic mode to avoid noise. And then the built-in display surprised me by not showing the level of pollution.

Instead, Korean stamps appeared, which, unfortunately, I was not able to photograph or develop again later. So I don’t know what they meant but I guess that it was a sensor error due to an excessively high level of air pollution. Of course, the purifier continued to work, and after a while the normal indicators reappeared.

The amount of dust in the apartment has also decreased a lot. Due to the fact that I live in a recently renovated apartment, the dust continues to escape from various nooks and crannies. Wiping the countertops and shelves every three days was standard. After a week-long test, I still don’t feel the need to wipe them.

Operating Samsung is quite simple. At the top we have a set of buttons responsible for all the most necessary functions. Switch, setting the airflow level and lock against changes. Some buttons, when held down, have different functions than when pressed.

A very pleasing thing to the eye is the fact that the front panel comes out when the purifier is turned on. Outside of Wind-free and Night modes, where it stays in place.

With the help of the application, we can remotely turn off and on the purifier, check the current air condition in our apartment, and change the operating modes. Additionally, we can set a cleaning schedule, enable the “Welcome cleaning” option, which activates a more powerful mode to enter the house and enjoy clean air.

A very important function is also the ability to turn on diagnostics , which may mean that we will not have to send the equipment back for warranty.

Night and wind-free modes are ideal options for people who need to fall asleep in perfect silence. They generate practically no noise and are imperceptible, especially if, for example, there is a refrigerator nearby, or we hear noise from the street.

The second speed is easily audible during the day. He can disturb you when you want to engage in silent reading or talk to someone who is quietly speaking on the phone.

The fastest mode is way too loud. Personally, I would only run it in the event of burning something in the kitchen. It significantly interferes with everyday functioning or ordinary conversations. Of course, it is very important to quickly clean the air of such poor quality, but it is better not to be in the same room when the purifier is running.

In addition to noise, the purifier also shines. The front panel only goes out in night mode. Information on the exact amount of impurity disappears when it has been the same for a long period of time.

Samsung AX47 review – is it worth it?

Yes and no. It is a purifier with a specific design that you may like very much. It is also lower than the competition, so it can be conveniently placed in many places.

A very important aspect is also the possibility of combining it with a second identical purifier. Thanks to this, we can place it in a larger room than the suggested maximum 47 meters. Unfortunately, it is also simply expensive compared to the competition.

Samsung AX47 is a very nice, although large air purifier. It quickly cleans the air in the apartment and also significantly reduces the amount of dust in the rooms. The application is very pleasant to use, but the automation sometimes overreacts.