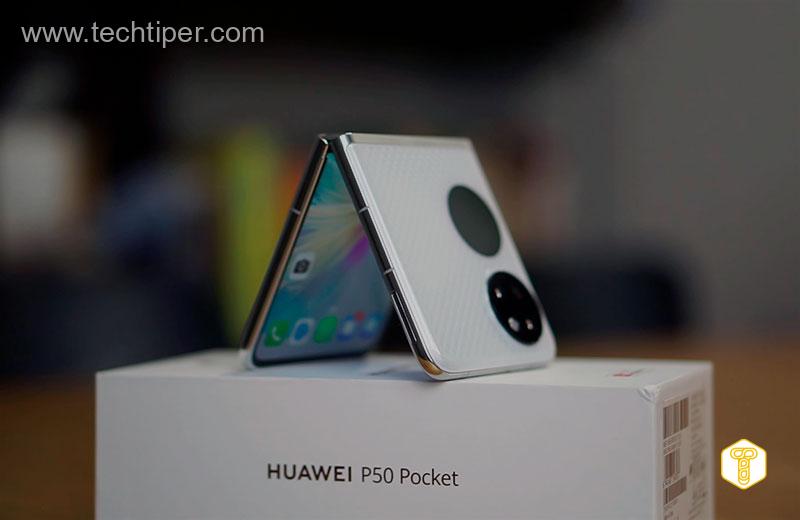 The Huawei P50 Pocket is a foldable smartphone like the Galaxy Z Flip3 that fits easily into any pocket. When opened, the OLED display has a diagonal of 6.9 inches, when folded, the device is no larger than a pack of cigarettes.

Since the P50 Pocket is a flagship, it has a Snapdragon 888 processor and 8 or 12 GB of RAM. On the back cover is a second display, convenient for taking selfies with the main camera. But, the main problem of Huawei smartphones is the lack of Google services.

There are few accessories included with the Huawei P50 Pocket, but more than the Galaxy Z Flip3.

The smartphone comes with:

Huawei P50 Pocket is a unique model. The smartphone folds in half and becomes compact – hence the name Pocket (pocket).

On the back cover, attention immediately attracts a round module with cameras and the same round second display a little lower – this P50 Pocket resembles Huawei P50 Pro and P50. The screen is small, but the clock and notifications are placed on it, and when shooting with the main camera, the display acts as a viewfinder.

The curve in the middle is covered with silver metal frames that continue on the sides. When closed, both halves are parallel to each other, in contrast to the Z Flip3, which leaves a small gap in the bend area.

In the open form, the bend is almost imperceptible not only externally, but also when touched. On the other hand, the smartphone is not so easy to leave open at a certain angle – it either fully opens or closes.

There is only a rubber plug at the SIM slot, which can fit two nano-SIMs or one nano-SIM and one Nano Memory card from Huawei. True, the minimum amount of built-in storage is 256 GB, so a memory card is hardly needed.

The power key with a fingerprint scanner and the volume buttons are located on the upper half of the right side of the case. Given the peculiarities, the unlocking process is a bit tedious – you first need to open the smartphone, and then touch the scanner.

On the bottom side of the case there is a speaker, a main microphone and a USB-C connector, on the top there is another microphone. Huawei’s P50 Pocket is slightly thinner than the Flip3 at just 7.2mm when open, though it does feel 3mm wider. However, the device is more compact due to the lack of a gap between the two halves, so it is more convenient to carry in your pocket.

Other characteristics worth noting are the refresh rate of 120 Hz and the polling of the touch layer of 300 Hz. The maximum brightness is 800 nits in adaptive mode, which is 130 nits below the Galaxy Z Flip3. When manually configured, does not exceed 520 nits.

There are two color profiles to choose from: Normal and Vivid. The first one switches between sRGB and DCI-P3 depending on the content on the screen, and the average dE2000 is only 1.3 for sRGB. In Saturated, the colors are more juicy, and there is no question of high accuracy of shades. The color temperature can be changed independently through the color wheel.

On Dynamic it is 90Hz in most cases, but switches to 120Hz while navigating through settings. If you do not touch the display, it will drop to 60 Hz after a few seconds. In High refresh rate mode, 120Hz will be in most apps, even browsers. The only problem is that when the case heats up, it can drop to 60 Hz, which is often the case in games.

In terms of cameras, the Huawei P50 Pocket is nothing special, although the 32MP ultraviolet sensor is of interest.

True, there is little benefit from it – in addition to the Sunscreen Test function, the lens is almost never used. There are no Leica logos on the back either – it seems that cooperation with Huawei concerned only the development of the P50 Pro.

The main camera shoots at 40 megapixels, but thanks to Quad Bayer technology, photos are saved at 10 megapixels. 13 MP ultra-wide-angle sensor with a 120-degree field of view. There is a 10.7 MP front camera on the front, although the external display allows you to take selfies with the main one.

The quality of shooting from the main lens is excellent – there is almost no noise even in the shadows or in the sky, and the dynamic range is very wide. Colors are saturated without appearing unnatural, and white balance is accurate. Good results are obtained by 2x zoom, albeit digital.

The P50 Pocket’s ultra-wide-angle camera is great for close-up shots thanks to its autofocus. Outperforms individual 2MP or 5MP macro lenses and supports HDR.

We have to admit, low-light photos are interesting – they look like frames from a sci-fi movie. The camera is also used for the Sunscreen Test function, which allows you to see the sunscreen applied to the skin.

The P50 Pocket is capable of recording 4K/60 fps video from all “real” cameras. The default codec is H.264, although you can select the more efficient H.265 in the settings. Stabilization is always on and available even at 4K/60 fps.

As an operating system, the Huawei P50 Pocket smartphone uses EMUI 12 based on Android 11.

A feature unique to the Pocket is the Super Privacy mode, which restricts access to the camera, microphone, and location. You can make the mode automatically turn on when folded.

One of the many themes is installed on the external display, and the always-on mode is available for both screens. Widgets can be displayed on the small display: current workout information from Huawei Health, music playback, voice recording, and more. The screen also shows notifications.

The Mirror app has an interesting Sunscreen Test feature that lets you see how well you applied sunscreen to your face. For this, a 32 megapixel ultraviolet camera is used.

Otherwise, the EMUI 12 shell is the same as on other models from Huawei. In the settings, you can make sure that the wallpaper changes every time you unlock your smartphone. Swiping down on the lock screen launches frequently used apps and features.

The home screens contain all installed apps, but you can turn on the app drawer in settings. Icons can be grouped into folders, and there is support for large 2×2 folders that fit 9 icons.

The P50 Pocket has Huawei’s Celia voice assistant, which for some reason was not on the P50 Pro. He executes different commands, turns on alarms and searches for the necessary information on the Internet. Other smart features from Huawei like AI Lens and Touch are also available.

EMUI 12 offers a Sound Booster feature, but it doesn’t boost the sound as the name suggests. Your smartphone becomes a listening device, the sound from which is broadcast to the headphones or speaker connected via Bluetooth. So, P50 Pocket can be used as a baby monitor or eavesdrop on conversations.

The Device+ feature will be useful for those who have other Huawei devices. It facilitates the interaction of the phone with tablets, laptops and TVs of the company.

The Huawei P50 Pocket runs on a Snapdragon 888 processor, and without 5G support.

In the vertical position, this problem does not arise – but only while the phone is not in hand. If you turn off the performance mode, throttling is negligible, however, the speed is lower. However, in real use, such high loads are rare, so you should not worry.

The sound is balanced, although the main speaker is more detailed and louder. But comparing with the flagships, the volume is not the highest, and the quality is average – it is better to use headphones.

Huawei SuperCharge 40W charger included. In half an hour, 70% of the energy is restored, and the full one takes 55 minutes. There is no wireless charging here.

Galaxy Z Flip3 boasts IPX8 water resistance and support for Google services. In addition, the Flip3 has a brighter display and louder speakers. But Pocket surpasses the competitor in terms of shooting quality, and the ultraviolet camera allows you to take interesting experimental photos. Charging from Huawei is also much faster, and there is support for a memory card.

The Samsung Galaxy Z Fold3 is another foldable smartphone, but it’s more of a mini tablet than a “pocket” device. If you’re after a powerful phone, get the iPhone 13 Pro Max , which beats the P50 Pocket in every major spec.

Huawei P50 Pocket is a smartphone more for lovers of new technologies, and not for everyday use. You will not have Google services, the processor will heat up during games, and there is no water protection at all.

But there is a unique design – P50 Pocket folds in half and fits easily into any pocket. The external display allows you to quickly find out the time or read messages, and also acts as a viewfinder when taking selfies with the main camera.

Huawei’s foldable P50 Pocket is for those who are willing to overpay for a unique foldable design. According to the characteristics, the phone is inferior to competitors, but it costs more.