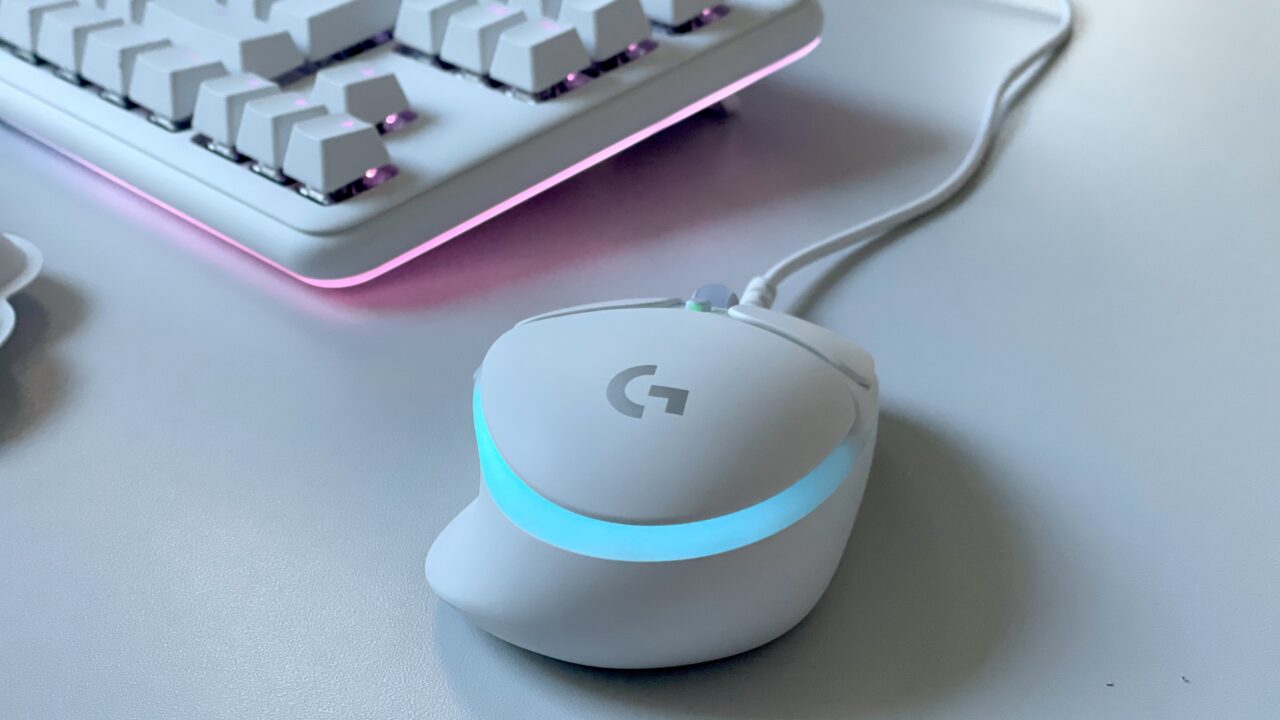 Logitech G705 is a mouse that focuses on aesthetic impressions, interest of the fair sex and wide gaming possibilities. However, the price can be prohibitive for people on a budget.

Logitech G705 wireless mouse – Aurora Collection is a specific set of gaming gadgets – it is distinguished not only by high quality of workmanship and attention to comfort, but also aesthetics, described by the manufacturer as “dreamy”. All the accessories included in the Logitech Aurora collection are available in one color version – White Mist – and include the following devices:

and set of add-ons and accessories with which you can personalize products more or add more colors. Unfortunately, they do not include the personalization of the mouse.

While black color, inserts in strong colors and sharp lines are usually dominant in gaming products, the devices included in the Aurora gaming collection definitely break this pattern. They are offered in off-white, have rounded shapes and inserts that emit subtle RGB light. This clearly indicates the target group – new headphones, keyboards and a mouse are to hit the tastes of women. And how does their operation look like from the practical side? The Logitech G705 mouse went first.

Get the Logitech G705 Wireless Mouse

Delicate, feminine aesthetics are only part of the characteristics of the mouse. Six programmable buttons, convenient shape and low weight translate into comfort while working at the computer or while playing. It is, after all, an accessory that was created with gamers in mind (but I doubt that it will get hold of the best gaming mice).

In addition, using the G Hub program, the user can provide full control over the DPI settings and the RGB lighting bar, as well as assign functions and macros to the buttons. If you are not interested in these types of capabilities, the G715 can be left at its default settings – and it will still run smoothly and precisely enough. However, does this compensate for the high price?

The products offered by Logitech as part of the Aurora collection are not the cheapest – and this is also the case with the Logitech G705 mouse. The accessory was valued at USD $99.99.

In terms of marketing, the entire series is effective, consistent and can be enjoyed – but I’m not sure if the price of Logitech G705 is adequate. Especially that among the mice for players you can find cheaper models with better parameters.

Get the Logitech G705 Wireless Mouse

What’s in the set?

The mouse has been packed in a box that graphically harmonizes with other elements of the Logitech Aurora collection.

The packaging itself is small, but inside it hides a wireless gaming mouse with a built-in lithium-ion battery, LIGHTSPEED wireless receiver, USB extension cable, data and charging cable, and documentation.

The appearance, structure and operation of the mouse

The mouse draws attention with its compact size and light weight – if only for this reason it will prove itself not only as an accessory for players, but also for mobile people working with a laptop. The whole thing is easy to run on various surfaces – both on the table top and with the use of a pad. This is facilitated by large Teflon fields, thanks to which the mouse smoothly “glides” during use.

The manufacturer designed it for smaller, female hands – and actually did it brilliantly. It is a pity that a left-handed version has not been developed. You can feel that it is a high-end product, because although the mouse is made of plastic, it is of good quality and has a pleasant-to-touch finish. It is a combination of glossy and matte fragments and a translucent strip that illuminates spectacularly, although subtly, with various colors. It is a pity that when playing or simply using the mouse, most of this bar is covered with the hand.

The hand rests comfortably on the mouse, mainly due to the appropriate profile and thumb rest, the pleasant-to-touch, matte texture on the left and right click buttons also deserves a plus. There are also buttons near the thumb, but in such a way that I could not press them accidentally even once. When it comes to the grip of the mouse, in the case of Logitech G705 the dimensions of the accessory do not allow the use of the so-called palm grip which is considered the most comfortable for players. In my case, the claw was optimal, i.e. the so-called claw grip.

The part of the casing, where the center of the hand rests, can be dismantled – underneath there is a place for storing the USB receiver. There is no risk of incorrectly installing this panel later – instead of latches or other methods, magnets have been chosen here that stably fit and connect everything.

Logitech G705 works well in a variety of games – I tested it playing Minecraft, Lego games, No Man’s Sky and Dota 2. Also from the point of view of an amateur, who plays rather occasionally, I see no reason to complain. However, taking into account the specifications, it is impossible not to notice that the mouse does not have top parameters from the players’ point of view (taking into account, for example, the resolution). To a large degree is a product of the so-called lifestyle, which to some extent touches the gaming segment.

The mouse can be connected to a computer with a USB cable, but you can easily use two wireless options – Bluetooth and LIGHTSPEED (a wireless solution that, according to the manufacturer, provides low latency and reliable performance in gaming mice and keyboards).

Connection using Bluetooth requires prior pairing using the button on the bottom of the mouse, to the left of the optical sensor (on the left there is a switch). LIGHTSPEED, on the other hand, requires the use of the included adapter and extender.

The manufacturer gives a maximum working time of up to 40 hours with RGB backlight turned on. Is that a lot? Rather not, since even cheaper gaming mice (eg Razer Orochi V2) can provide 10 times longer battery life (and also offers a DPI of 18000). Even half the Logitech G305 LightSpeed ​​mouse is expected to provide up to 250 hours of gameplay.

With these numbers, less than two days in the G705 model do not look inviting. It’s good that there is a USB-C charging port on the front of the mouse, so you can use it even when the battery is empty. Using the Logitech G705 while connected via cable and charging does not affect the speed or performance of the mouse in any way.

The rechargeable lithium-ion battery is built-in and the manufacturer suggests removing it only for responsible recycling, when the mouse is for disposal only.

Logitech G HUB is an application that gives users of mice, keyboards, headphones, speakers and other devices from the Logitech G series a wide range of options. , color wave and immersion) but the G Hub allows you to even better adjust the backlight to your preferences. It also allows you to check the state of charge of connected accessories.

The application also allows you to program the action of each button according to your needs, for example for specific actions in games. It is worth adding that the mouse has an internal memory slot, so you can save the entire profile for when or for an application.