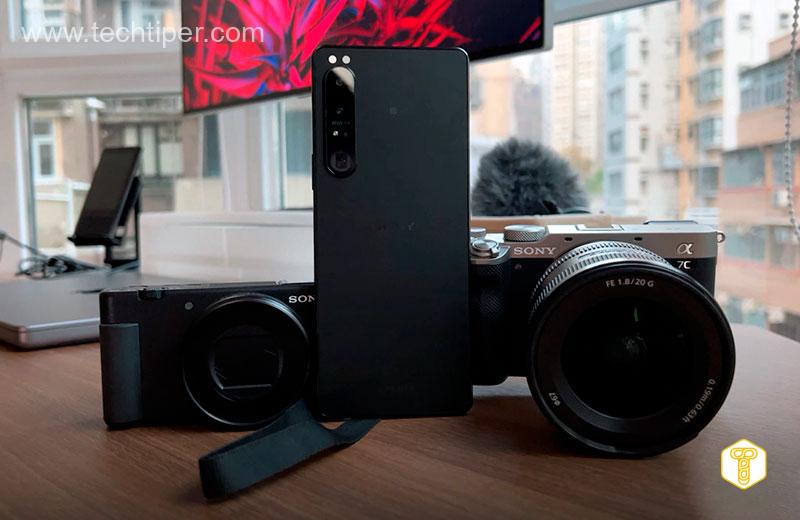 Sony Xperia 1 IV is a great camera phone from a Japanese company. You get an incredible 4K display, a powerful Snapdragon 8 Gen 1 processor, and one of the best camera systems around. Only the design of an elongated case remained traditional for the line.

The body of the smartphone is protected from water, and a comfortable grip makes it easy to shoot on the go. The sound quality of the stereo speakers has also improved, and the battery lasts longer. In addition, Sony has entered into an agreement with YouTube, so you can live stream from Xperia 1 IV even if you do not have the required number of subscribers.

Therefore, inside a thin cardboard box, except for the Xperia 1 IV, there is nothing: no charger, not even a cable.

The new Sony Xperia 1 IV is no exception. Sony’s flagship phone is vertically elongated – not only does it have a 21:9 screen ratio, but rather thick bezels at the top and bottom. The top bezel houses the front-facing camera and sensors, including a notification LED, so there are no unnecessary elements on the display.

There is also a speaker at the top, and the main speaker below the display, both are directed forward. This solution provides balanced sound and enhances the immersive effect when watching movies. The front and back of the case are covered with Gorilla Glass Victus, and the side frames are made of aluminum.

The cameras at the back are in an elongated vertical module, reminiscent of the shape of a smartphone, surrounded by a metal frame. Above the module is an LED flash and a color spectrum sensor to improve white balance, as well as the accuracy of tones when shooting.

The top side houses a 3.5mm headphone jack and a secondary microphone, while the bottom side houses a USB-C port, a hybrid SIM slot, and a primary microphone. Unlike other smartphones, the SIM eject key is not needed here – the slot’s rubber cover can be opened with a fingernail, as on past Xperias.

There’s nothing on the left side of the case, while on the right you’ll find the power, volume, and shutter keys. The power button has become larger, as well as the fingerprint scanner placed in it. The sensor works quickly and accurately, although it is always active, which often causes accidental clicks.

The surface of the shutter button is textured and easy to find by touch. The key can perform two actions and allows you to quickly launch the application for shooting or adjust the focus and take a picture from any camera.

This is a 6.5-inch OLED panel with a resolution of 3840×1644 (4K), an incredibly high pixel density of 643 ppi and an aspect ratio of 21:9. It is important that there are no sensors or a front camera on the screen, there is nothing to distract you while watching a video.

The resolution is not always equal to 4K, because then the energy is consumed much faster, and not all applications support this parameter. Most of the time, the resolution is 2560×1096 pixels, and it only goes up to 4K when viewing photos or videos.

The refresh rate goes up to 120Hz, but it’s non-adaptive like many of its competitors. If the high refresh rate is enabled in the settings, you will have 120Hz everywhere (including games). Only when watching a video or in some applications like Google Maps will the frequency drop to 60 Hz.

In the settings, you can choose between Creator and Standard modes, and in the White Balance section, three more presets are available: Warm / Medium / Cold. In Creator mode, colors are adjusted according to the content on the screen, and if necessary, it switches between sRGB and DCI-P3 color profiles.

This is the most interesting camera of all because it has optical stabilization and two fixed zoom levels: 3.5x and 5.2x. Changing the zoom between the two values ​​is smooth, as if you were using a digital camera with an optical zoom lens.

A 12MP main sensor with optical stabilization and a 12MP ultra-wide-angle sensor with a 124˚ field of view. A 2MP 3D depth sensor completes the set, and a 12MP front camera is located in front.

All lenses feature SteadyShot technology with FlawlessEye for enhanced low-light stabilization. Eye AF and real-time subject tracking are available. For those who like to shoot video, there is an automatic shooting with a wide dynamic range and wind noise reduction.

As expected, the main camera takes amazing photos in daylight – the 12MP shots are incredibly detailed and completely free of noise. The clarity is also pleasing, and there is no excessive sharpness, and the shades are natural, regardless of the type of object and lighting.

The dynamic range also deserves praise – the photos are distinguished by high contrast and bright colors. The shadows are a little darker than we would like, but this is a minor drawback. The image quality of the Xperia 1 IV main camera is one of the best among all existing smartphones.

The photos from the ultra-wide-angle sensor are also impressive – they are highly detailed and clear, although blurring is slightly noticeable at the edges. Nevertheless, the shades are natural, and only Huawei flagships have such an ultra-wide-angle lens.

The telephoto lens has two viewfinder presets, 3.5x and 5.2x, which can be seamlessly switched between. Increasing the zoom reduces the sharpness slightly, but the quality at 5.2x remains excellent.

To shoot through Cinema Pro, you need to be able to set various video recording parameters and work with the material in post-processing. If you just need to shoot something quickly, it is better to use the standard application.

In terms of software, the Sony Xperia 1 IV smartphone is similar to other recent models from Sony.

It’s almost pure Android 12 OS with a few extra features from Sony. An always-on mode is available, called Ambient Display, and on the lock screen there are customizable clocks and two launch icons for the camera or Google Assistant.

An interesting Sony feature is Side Sense. This is a sidebar where you can find a menu with apps and features, the list displayed is based on your past activities. This is also where the pairs of applications for the split screen mode are set.

Gamers will love the Game Enhancer section, which allows you to broadcast gameplay, make settings for each game individually, and manage notifications. There’s even an option to activate an artificial refresh rate of 240Hz, which eliminates the blur effect. Sony recommends enabling this option for all games that support 120 fps.

The amount of RAM is 12 GB, and Adreno 730 is responsible for the graphics. In the GeekBench 5 performance test, the Sony flagship shows approximately the same results as the competitors: 1160/3403 points. In the GFX Car Chase ES 3.1 (onscreen) graphics test, the gadget scores 74 fps, which is one of the best results among all Android smartphones.

Alas, this is achieved due to strong throttling. At maximum loads for an hour, the processor retains only 63% of its performance. With graphics, things are even worse – the power of the Adreno 730 sags up to 47%. However, even these values ​​are enough so that in everyday work you will not notice a hint of freezing or lag.

Sony is one of the few companies that put forward-facing speakers on their smartphones.

On Xperia 1 IV there are two of them – above and below the display, they form a stereo pair. Due to this arrangement, the sound is balanced and appears louder. The bass has also become more powerful, so the sound is deeper and richer.

This was needed by the new Xperia, since the 1 III and Pro-I had problems with autonomy. A single charge of the Xperia 1 IV battery lasts for 11.5 hours of normal tasks or 15 hours of video viewing.

True, the adapter is not included, as well as the cable, so you have to buy them separately. If you use the 30W XQZ-UC1 PD device from Sony, 45% of the energy will be restored in 30 minutes, and the whole process will take 1 hour and 40 minutes.

The Xperia 1 IV is a true flagship phone with unique features you won’t find on other smartphones.

One alternative is the Samsung Galaxy S22 Ultra with 256GB of internal storage. You get an S Pen stylus and a huge Dynamic AMOLED 2X display. The S22 Ultra also boasts excellent photo and video quality, with two telephoto lenses with 3x and 10x zoom. While the shots don’t look as natural as Sony’s, there is 8K video recording.

The Google Pixel 6 Pro is cheaper than the Xperia and shoots just as well, especially in low light. The rest of the Pixel is inferior to the Xperia 1 IV. But, if cameras are a priority for you, you can save money by choosing a Google smartphone.

Of course, the Apple iPhone 13 Pro Max is also worthy of attention with an excellent AMOLED screen, thoughtful software, amazing speakers and impressive shooting quality. When recording video, stabilization and 60 fps mode are available, and the dynamic range here is very wide. The iPhone has more powerful hardware, although no Android smartphone can compare with the Pro Max here.

The Sony Xperia 1 IV has a lot to brag about: it has an incredible 4K OLED screen, Qualcomm’s most powerful processor, forward-facing stereo speakers, and good battery life. The main thing is almost professional cameras, especially if you buy additional accessories from Sony.

But, there is a smartphone and nuances. For example, throttling – the gadget quickly reaches a critical temperature, so the power of the graphics and central processors is halved. However, the chipset is so powerful that you won’t notice any performance degradation.

Despite the nuances, Sony’s Xperia 1 IV is an excellent smartphone, especially for professional photographers. If Sony solves the processor throttling issues, the model will become the best Android flagship on the market.