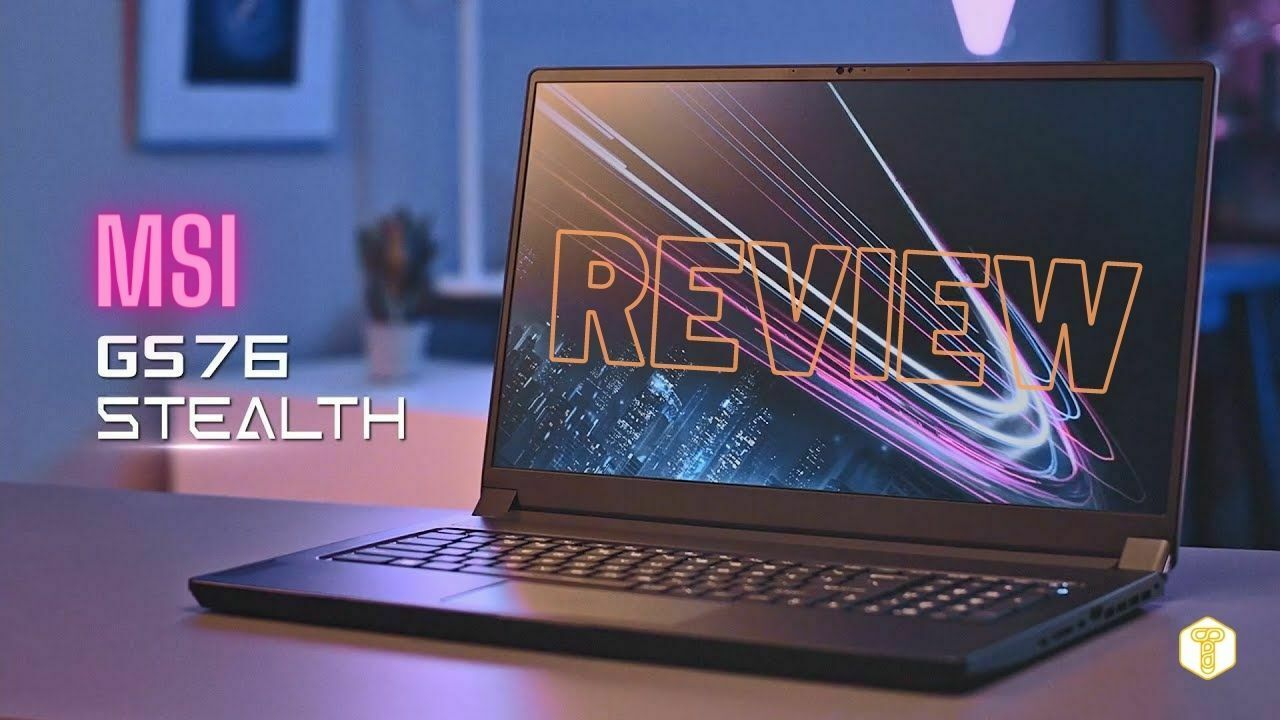 Looking for a powerful 17-inch laptop that’s easy to carry around? The MSI GS76 Stealth will prove to be an excellent choice. High performance here is provided by an Intel Core i9-11900H processor, 32 GB of RAM and an NVIDIA GeForce RTX 3070 graphics card.

On the other hand, the display lacks brightness, the case heats up, and the speakers are weaker than the competition. You will learn about many features and differences of this laptop from my review.

The GS76 Stealth has plenty of connectors. On the left is a USB-C that supports charging, an RJ45 Ethernet port, two USB-A and a headphone jack. On the right is an HDMI port, one Thunderbolt 4, an SD card reader, and one USB-C. The only thing missing is Mini DisplayPort.

With its high frequency and rich colors, the screen is suitable for gaming and watching movies. The DCI-P3 color space is 112.1%, which is excellent for a gaming laptop. But the brightness of 300 nits is often not enough – all competitors have it much higher, and this is one of the main problems of the GS76 Stealth.

Beautiful RGB color backlighting is customizable for each individual key in the SteelSeries Engine 3 application. The only drawback of this keyboard is that the Fn button is located on the right.

The 11.9 x 6.1 cm touchpad on the GS76 Stealth feels small by today’s standards, but you quickly get used to it. The surface of the panel is smooth, although the feedback when pressed is insufficient. But all Windows 10 gestures are supported and there is FaceID facial recognition technology.

The upward-facing speakers produce a weak sound, and artificially boosted bass makes the situation even worse. Effects in games do not sound clear, even setting through the Nahimic application does not help. If the speakers are weak, no equalizer will save them, so you can’t do without headphones in the case of the GS76 Stealth.

There is a lot of noise on the video, it will be difficult for the interlocutor to make out even the inscriptions on your clothes. Colors are washed out and objects in the background blend into each other. In general, if you plan on using your webcam frequently, get some external peripherals.

The functionality of these two programs is the same, but the interface now looks more professional and cleaner. In MSI Center, you can check the temperature of internal components and their workload, adjust performance, download updates, and get general information about the system.

You can have a game open in the background, dozens of Chrome tabs, and five YouTube videos, and you won’t notice any lag. In the GeekBench 5.4 performance test, the MSI notebook scores 8102 points. For example, Lenovo Legion 5 Pro on AMD Ryzen 7 5800H has only 7342 points, while Alienware m15 R4 has 7636 points.

One of the performance issues of the MSI GS76 Stealth is that it gets very hot. After just 15 minutes of gaming, the temperature of the bottom surface of the case reaches 45 ° C, which is above the comfortable level. The keyboard reaches 38°C in the center and 29°C in the touchpad area. And this happens even while watching a video, not to mention games and “heavy” applications.

In Assassin’s Creed Valhalla, I got 53 fps on max settings at 1440p. The performance test of Shadow of the Tomb Raider at 1080p with the highest settings produces 84 fps.

However, the MSI GS76 Stealth is equipped with a 99 Wh battery, which is enough for 5 hours of autonomous use. The rival Alienware m15 R4 runs out of power in 4 hours, but the Legion 5 Pro can last up to 6 hours thanks to its power-efficient AMD processor.

The MSI GS76 Stealth is a great gaming laptop with powerful hardware, a comfortable keyboard and long battery life on a single charge.

On the other hand, the display lacks brightness and the speakers are not of the highest quality. The case quickly heats up to an uncomfortable state, especially from the bottom – you can’t put a laptop on your knees.

Despite the shortcomings, MSI’s GS76 Stealth can easily handle any modern game at high frequencies, so you can close your eyes to the little things.

The MSI GS76 Stealth boasts strong performance, long battery life and a comfortable keyboard, but the display and speakers could be better.