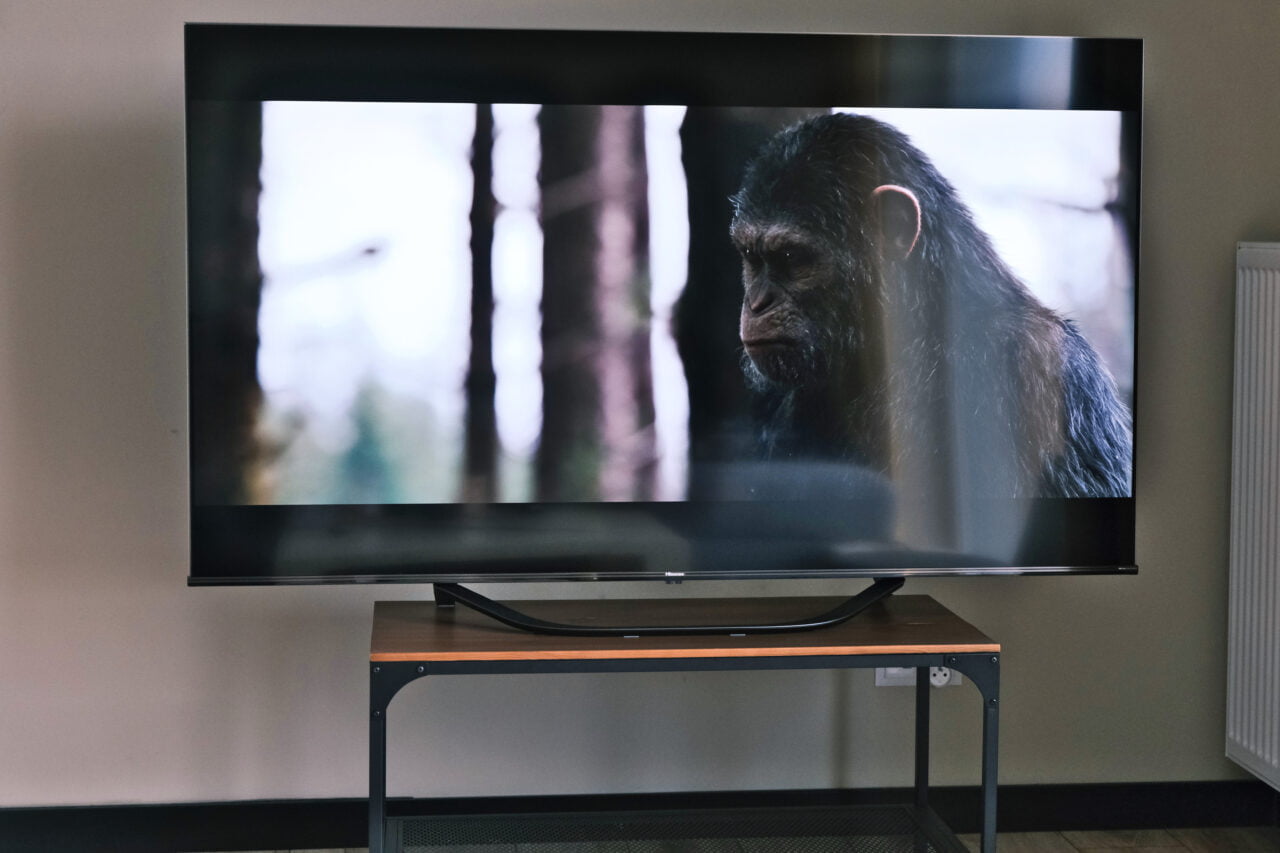 The Hisense U7HQ is a lower-middle-shelf TV set that offers higher-middle-shelf elements. Thanks to this, we get a great image and quality of workmanship. However, we lose on the remote control and the sound quality.

The soccer World Cup is just around the corner, and the Hisense U7HQ is the official models of the FIFA World Cup 2022. How does it perform in sports and beyond? Is it worth buying? These questions will be answered by the Hisense U7HQ review.

However, there is a risk that by removing the upper part of the packaging, we will hit the TV, and with a stronger impact, we may even knock it over. So I would suggest unpacking the new screen with two people , as it is a much safer option.

The Hisense U7HQ is available in two of the most popular sizes, 55 and 65 inches.

As for the specification and image quality, none of the available sizes is frighteningly expensive.

The Hisense U7HQ is a well-made TV for the budget it is in. The TV has a fairly slim bezel that is easy to hide with this screen size. On the front we will not find many unusual elements, because the only thing that stands out is the manufacturer’s logo in the middle of the lower frame and the Dolby logo on the right. However, they are so small that we will probably forget about them when we set the TV at its destination .

Almost all the connectors are on the left side (looking from the front) of the TV, thanks to which we have very easy and quick access to them, even when the TV is hanging on the wall. On the back there is only USB 2.0, an optical output and an RJ45 connector.

Pretty thick for a wall

The thickness of the Hisense U7HQ TV does not allow us to stick it perfectly to the wall , because less than eight centimeters is not enough. The backs, on the other hand, are very basic, the lower part with electronics has a texture typical for the manufacturer, and the upper one is smooth.

Hisense U7HQ is equipped with a specific finished remote that is just as specific to use. For me, it is probably the least comfortable remote control I have ever used . It is the thickest in the lower part and gradually slims to the top, which makes it moderately balanced, and it is thicker than most pilots known to me, so I cannot grip it very comfortably.

But the buttons are nice

However, it has a lot of buttons directing us directly to the application, there are as many as 12 of them . It is a pity that they are at the top, not the bottom of the remote. All the buttons are quite comfortable and pleasant to touch, but I didn’t like the arrows. There is one more layer of rubber around them that connects the other buttons. It often happens to me that I press them instead of an arrow in one direction and I am surprised that it does not work.

The phone application allows you to replace the remote control

Tizen is followed by VIDAA, which allows you to fully control the TV from the phone . It is also the fastest option for setting up your TV for the first time. The application quickly finds the TV, which we then connect to the Wi-Fi network, and then we can add a VIDAA account to it. The Hisense U7HQ TV can also simply be operated by telephone. Playing music and videos from a USB stick is much faster with the phone than with the remote control alone.

VIDAA that continues to grow

The operating system used in the Hisense U7HQ TV is the proprietary VIDAA, which is one of my favorite operating systems on TV . Why? It is incredibly smooth and fast acting. In the case of Hisense U7HQ, there are very rarely any cuts or problems with loading the application. The system itself is also intuitive, apart from searching for new applications. Apart from the fact that there are not many of them yet, because there are a lot of obvious deficiencies , often the applications that are available do not show up due to the lack of one letter in the name.

What apps are available on the Hisense U7HQ TV?

Canal + Online is also to be released soon , which will allow us to watch TV without the need for a set-top box. The manufacturer does not stop there and adds new applications on an ongoing basis. Sports fans can be satisfied, however, because Hisense U7HQ and the VIDAA system have many different applications dedicated to watching sports.

VIDAA has a very convenient access to the settings, which in most cases are well translated and well explained, which is a separate issue. Only in the case of the contrast enhancement feature can you get a little lost in what it means without eye contact. Apart from this element, most of the options show their effect immediately. I used mainly the “Cinema night” settings with the “Warm 2” color temperature and turned off additional options.

Noise canceling is not working as it should

The first thing I turned on on the Hisense U7HQ TV was the documentary series “Catastrophes in the Sky”, where they tragically recorded some of the interviews. They were definitely too dark, which resulted in a lot of noise in the recordings. The noise canceling option made a lot of squares appear that looked like a poor bitrate with a lot of data in YouTube videos. Without it, you can see the usual humming, which, however, is much less painful to the eyes.

The image quality is at a very high level

The Hisense U7HQ is a TV that offers a lot in your budget. Matrix 120 Hz, 600 nits, 32 local blanking zones. It is very decent, I must admit that. The blanking zones do a lot of work, but the small amount of them makes the blooming a little noticeable with contrasting elements . For example, when we turn on a Netflix movie and the warnings about elements in the movie have not yet disappeared.

It is also visible against the starry sky in the movie Interstellar, but due to the dynamics of movement in many scenes, it is much less visible than with the static elements of Netflix. For the price of the TV, it’s still a very good result. After all, at the moment it is the only TV set that premiered in 2022 and that has zone blanking in this price segment.

The colors are slightly ragged, but there are a lot of them

Even in the Night Cinema mode with the warmth of the image set to Warm 2, which is the most accurate mode according to the measurements, you can see slight variations . The whole thing is slightly too red, which can be seen mainly on the actors’ skin and in shades of gray.

Sometimes I also notice a slightly strange behavior of green, which increases the saturation of darker elements in this color too much. This happens relatively rarely, but it is the last element that caught my attention. Apart from these two things, I can only speak positively about the rest of the colors.

The color palette is very wide, because the TV set fills about 90% of the DCI-P3 space. The average Delta E error is 3.1, which is not a bad result. It is worse in the grayscale, because due to the dominance of red this error is as high as 4.5.

The contrast is really good

As I mentioned, the local blanking zones on the Hisense U7HQ TV work really well. The visual contrast is at a high level, especially in dynamic shots. We will not experience perfect black here as in OLED TVs, but the effect of glowing black is only visible in really dark environmental conditions. In the case of movies and everyday viewing, I also did not notice any loss of detail in shadows or highlights. As for this amount, it is really great.

The viewing angles are decent for a VA matrix

The basis of the Hisense U7HQ TV is the VA matrix, which, as a rule, does not have very good viewing angles. However, it is not tragic for this reason, because you can easily watch TV without sitting in front of the TV and you will not experience problems with colors and tonality.

The sound does not match the picture in any way

Hisense U7HQ is equipped with two speakers with a total power of 20 W. And it is very average. The television does not allow you to enjoy movies where more is happening, and in the case of many poorly produced dialogues , it’s hard to understand what the actors are saying. It is even worse in sports, where commentators very often have mediocre microphones, and in the background you can hear the audience or the roar of engines in the case of motorsport. The TV on its small holder is very low above the countertop surface, which also makes it a bit difficult to choose the right soundbar.

Is Hisense U7HQ suitable for a bright living room?

Yes and no. In my measurements, I was unable to reach the advertised 600 cd / m2, usually around 540 cd / m2. This allows for a nice HDR effect, but in the case of fighting the sun, the TV set can lose. For the amount you have to pay for it, it’s still pretty good. If we are not able to spend more on a TV set, I would not be afraid to put it in the living room anyway. In the case of light not directed centrally on the screen, everything will be visible, and when viewing at night, 500 nits will still allow a pleasant HDR effect.

Hisense U7HQ in sports and games

The reviewed Hisense U7HQ performs very well in both of these applications. Two HDMI 2.1 connectors allow us to connect two latest-generation consoles, and they also support Dolby Vision, VRR and ALLM, which is everything we can need. Movement is natural, although without blur reduction you can sometimes see slight motion streaks in games. At very low levels, there is already a positive difference, without the feeling that the image is unnatural. In the case of watching sports, I did not have to turn on the blur reduction even once.

Hisense U7HQ is a very good and universal TV that has a lot of possibilities and additional functions that are currently beyond this price range . Great image quality thanks to 32 zones of matrix blanking, as well as QLED technology is able to delight even the more demanding.

Let’s add a very good operating system, which is very fluid, but still lacks some applications, although the manufacturer is developing strongly in this regard. Unfortunately, Hisense did not make any effort when it comes to the audio system in the reviewed TV, so if we experience shortcomings, we will probably quickly decide on a soundbar, where the Sonos Ray or Teufel Cinebar 11 will fill the gap relatively inexpensively .